For those who have been following the back and forth over the Less is More blog I posted last week, here’s the poster that upset some cardiologists when it was up on the Parsemus Foundation’s site.

Over the top? Of course it is — it’s satire! And like all good satire, it contains a few grains of truth mixed with a hefty dose of exaggeration.

Still, it’s only fair to point out that stents aren’t really the modern equivalent of leeches. Back when bloodletting was in vogue, it was believed that an excess of blood (one of the four “humors”) was to blame for everything from epilepsy to rheumatism to tuberculosis. Got a fever? Let’s bleed you! Given the prevailing view of physiology, leeches were an obvious, if entirely wrong-headed, way to rid the body of disease. 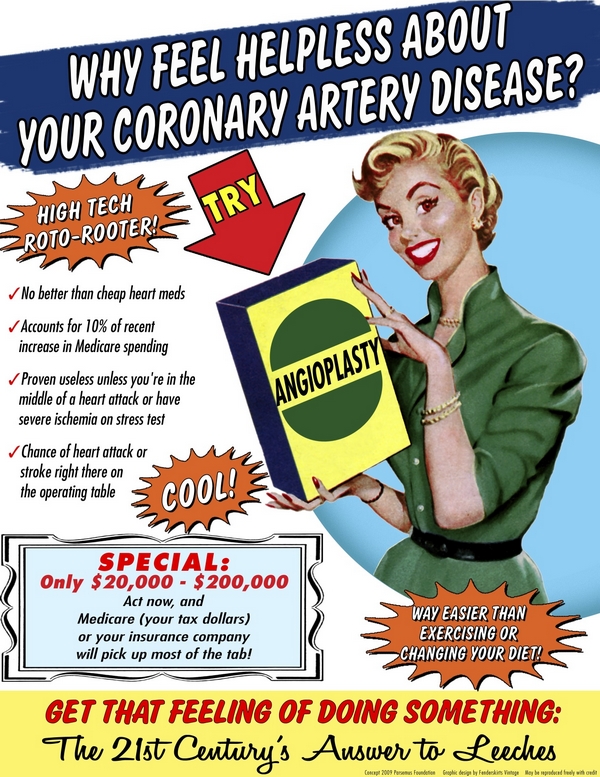 Angioplasty and stents, on the other hand, are backed up by more than belief and theory. In fact, to cardiology’s credit, there is a wealth of valid scientific evidence to guide their use. (These two treatments are often called percutaneous coronary intervention, or PCI.) Among the most important studies was the COURAGE trial, published in 2007, which prompted cardiologists to re-examine their assumptions about the effectiveness of PCI, and according to a thoughtful post by Larry Husten (@cardiobrief) at Forbes, has led to a steep decline in their use.That may be so, and maybe Husten is right that I was unfair to cardiologists in my blog last week. Husten argues that the COURAGE trial, along with the Mark Midei case (a cardiologist in Baltimore who is accused of implanting hundreds of unnecessary stents) have provoked a cultural shift within cardiology. He writes:

COURAGE provoked a long and complex debate in the cardiology world. This debate is by no means over, but it is fair to say that almost no one doubts the main conclusion of the trial today, which is that stents are no better than optimal medical therapy (drugs and lifestyle changes) in people with stable chronic angina in delivering important long-term health benefits like reducing death, heart attacks, or other adverse cardiovascular events.

That’s great news, but the fact remains that even after the COURAGE trial, 12% of stents and angioplasties are still being done on inappropriate patients — patients who won’t benefit from the procedure but who are nonetheless exposed to its risks. In a country that does more than a million cardiac procedures a year (per capita far more than any other developed country, by the way) 12% represents a lot of unneccessary stuff.

Maybe even more important, despite the COURAGE trial and the press coverage around rogue doctors who put in unnecessary stents, patients persist in inaccurate beliefs about the power of these cardiac procedures to save them from harm. This was highlighted by a paper published last September showing that three-quarters of patients undergoing PCI believed stents would protect them from having a heart attack and dying. The study had its limitations, chief among them being the fact that it was conducted at a single Boston hospital, but its small size doesn’t change its most important implication: Patients had an unrealistic view of the procedure’s benefits.

Now maybe there’s no helping foolish patients, but I think clinicians bear some responsibility. If patients come in with faulty assumptions about PCI, isn’t it up to their cardiology team to set them straight? That’s what informed consent is supposed to be about. The patient is supposed to give consent only after understanding the potential for both harm and benefit. Undoubtedly all of the patients in the Boston study signed the requisite informed consent document, but it seems the informed part of the requirement was a little sketchy.

This problem is not limited to a single hospital or to a single set of procedures. Numerous studies have shown that patients routinely fail to understand the tradeoffs involved in decisions around many different elective procedures and tests. These same studies also find that patients make different choices when they have access to something called a “patient decision aid,” a brochure, web-based interactive program, or video that lays out their options in a clear and balanced way and helps them think about the pros and cons of a medical decision.

I may be an “appropriate” candidate for, say, knee replacement surgery, but that doesn’t mean I want the surgery. Maybe I’ve got other conditions that put me at high risk for the surgery, or maybe the pain isn’t so bad and I want to delay getting the replacement until I’m older so I don’t have to have another surgery in ten years when the knee wears out, or maybe I want to try losing 20 pounds and see if that relieves the pain first.

When we focus on appropriateness, we are talking about the decision as if it were entirely the physician’s to make, when in fact an elective decision should be shared between physician and (well-informed) patient. As a patient, I want to be the driver; my physician is the GPS.

Shannon Brownlee is acting director of the New America Health Policy Program, blogs at The New Health Dialogue, and author of Overtreated: Why Too Much Medicine Is Making Us Sicker and Poorer.

With cancer, sometimes there is no right answer

Showing me how much medicine I've never even known existed