The iPad has received a significant amount of attention in the health care arena since its introduction last year.

The attraction is fairly obvious; it is a portable, lightweight, powerful computing device with an intui-tive interface and a large library of built-in applications. In fact, major medical schools such as Stanford and University of California, Irvine have made decisions to provide iPads to all incoming medical students this year. While predicting the future of medical technology is always precarious, here are a few things we have learned in the months since the iPad was introduced.

A short time ago, we published at IMedicalApps.com a brief entry describing the potential use of the iPad in the operating room. What we found was that a simple xray cassette sterile bag, ubiquitous in the OR, holds an iPad comfortably. Once the iPad is inserted into the plastic bag by the circulating nurse, the top can be cut off, folded back and clamped with a hemostat (see image) allowing the iPad to be safely brought into the sterile field.

Notably, we found that the iPad touch screen works quite well through the plastic bag, even while wearing gloves. Somehow, the touch of the plastic bag itself against the glass screen registers as a valid touch. There was hardly any problem navigating between and inside apps, or with gestures such as pinch and zoom. This was somewhat of a surprise since, as many people have noticed, using an iPhone touch screen with gloves is difficult at best and impossible if one is double-gloved. 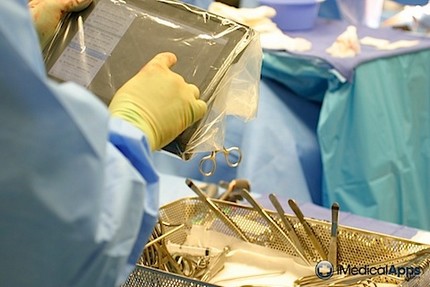 [Ed. This post is excerpted from the article published in the Journal of Surgical Radiology]

What is the use of an iPad in the OR? The reasons may actually be myriad but, generally speaking, the same features which make the iPad great for surfing the web, such as looking at images and viewing video, nicely translate into the operating room. Thus far, the most obvious use for me has been as a convenient way to easily access previous patient imaging. Additional potential assets of utilizing the iPad in the OR include the ability to review relevant anatomy at the point of care and enhancement to resident teaching. It can also be useful in bypassing hospitals’ restrictive networks to access remote files and office electronic medical records (EMRs) using the cellular 3G networks.

Recently, there was a report of a Japanese surgeon using an imaging application on the iPad to plan surgery in the OR (Medgadget). Although it is not clear what application was being used, I suspect it was OsiriX (seen in the accompanying images). I am not aware of any currently available applications for the iOS platform currently available which integrate with surgical devices such as laparoscopes, arthroscopes or computer-aided navigation. It is fun though to speculate about a future iPad-like device which might use onboard gyroscopes to provide an “augmented reality” view of internal structures, so that tilting the device would show different portions of the body. This could even conceivably be integrated with views from internal cameras, navigation or robotically controlled surgical instruments.

As previously mentioned, one use of the iPad in the OR is to bring patient imaging studies to surgery. But, how does one copy computed tomography (CT) or magnetic resonance imaging (MRI) images from a patient’s CD ROM to the iPad? I have found a very useful method involving two terrific and freely available resources; OsiriX and Dropbox.

The first, Osirix, may already be familiar to many readers of this journal. For those not yet acquainted, OsiriX is a free, open source DICOM (digital imaging and communication in medicine) viewer written for the Macintosh. I find it easily superior to just about every built-in reader bundled with patients’ CD-ROMs and routinely use it to view patients’ DICOM data. It is an indispensable part of my practice. In addition to basic features, such as measuring distance and angle, modifying window and level, zooming and panning, OsiriX has some features usually available only on expensive imaging workstations, such as 2D  & 3D  image reconstruction, and fusion of PET & CT studies. While the iPhone version of OsiriX will run on the iPad, I still find transferring DICOM files between the desktop and mobile applications unwieldy. Therefore, I will describe a simple method that uses Dropbox to export selected images to the iPad.

Dropbox is a multi-platform file-syncing utility.  This terrific service has a web component and native applications for Macintosh, Windows, Linux, iPhone and iPad. It is able to rapidly synchronize files across multiple devices through file-level trickery in which it determines only those portions of the files that are changed. 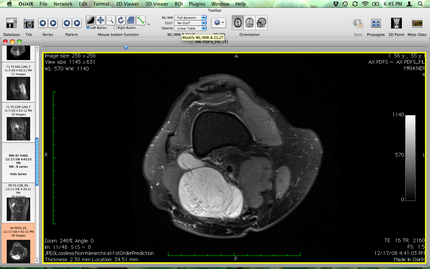 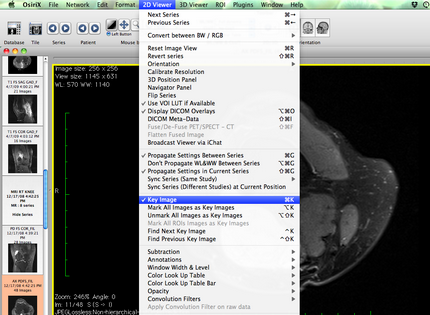 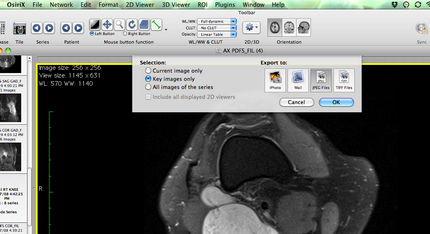 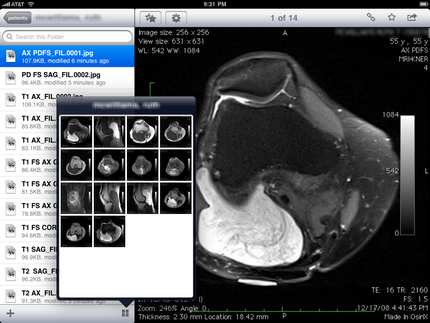 My workflow is as follows (see above screenshots):

I also use the Apple iPad camera adapter to quickly transfer intraoperative photos to my iPad.  For the curious family member, these photos can really enliven the post-op waiting room conversation!

One glaring omission on the iPad is a method to organize images into albums that would be preserved even when the iPad is synchronized with iPhoto. The apps available for organizing photos on the iPad, such as PhotoSort, appear to duplicate the images rather than manipulate the native photo album. We can only hope Apple will provide this function in future updates of the iPad OS.

iPad on the wards

Dr. Henry Feldman of Beth Israel Deaconess hospital in Boston shared with iMedicalApps.com his experience using the iPad as his primary computing device for a week as an attending.

One instance where the iPad really shone, he wrote, was its “nearly seamless experience” in accessing his hospital’s wireless networks. “The secure wireless network handoff was amazing. As I roved around it was seamless … and the best example is that I would use the elevator ride to catch up on news/tech websites, and every time the elevator doors would open it would reconnect and download some more prior to the door closing.”

The soft keyboard of the iPad, he found, was adequate for the bulk of his documentation needs on the wards. He brought his Bluetooth keyboard and iPad stand to the hospital but found both “sat on the shelf for one week, unused.” He used desktop computers for complex compositions such as admission notes and discharge summaries, but felt “this had less to do with the keyboard than being able to see multiple web pages at once.” Orders and discharge plans did not require an external keyboard although, “after one beefy paragraph the screen keyboard does feel a tad clunky.” Despite this enthusiastic report of iPad usage from an experienced physician, we should remember that Beth Israel has a sophisticated web interface for all their major clinical applications, making the transition to using an iPad fairly seamless. Personally, I also find a bluetooth keyboard much faster for typing longer documents.

When asked about security concerns with the iPad, especially if one is left behind inadvertently, Dr. Feldman pointed out that as with everything web-based, nothing is stored on the device. The iPad (like an iPhone) can be “remote-wiped,” meaning all the data and settings on the device can be erased remotely. Note that this requires a MobileMe subscription ($99 per year). Each of the applications in the hospital has a username/password, and network communication for most of the applications occurs over an encrypted (SSL) connection. These measures, Dr. Feldman suggested, already exceed the security that almost any institution places on paper charts. He also mentioned a strategy for the lock screen which I have since adopted. This involves replacing the iPad’s default background with an image including one’s name, cell and pager numbers, for device return information if the iPad were to fall into friendly hands.

The iPad clearly has the potential to be very useful in the hospital and in the operating theater. Medicine is, by its nature, a mobile occupation and a powerful and flexible computing device will almost certainly play some role in our future everyday practices. There is still much to be learned and undoubtedly we will see the introduction of other devices with different strengths and weaknesses. In my practice, using the resources described above, I have been able to maintain a portable image repository of my patients that has been very useful in the operating room, office, and in hallway discussions with colleagues.

Felasfa Wodajo is senior editor at iMedicalApps.com, where this post was originally published, and blogs at a few thoughts from a tumor surgeon.

Excited about the future of healthcare in the emergency department

Tagged as: Health IT, Surgery