Having a healthy level of respect for opioids is critical for any physician. For those of us who prescribe or recommend this class of medicines on a daily basis, this statement rings all the more true.Recent events and research reinforce this reality.

“Oxycontin, Other Opioid Painkillers Tied to Higher Health Risks” was the title of a recent BusinessWeek article that references a study in Archives of Internal Medicine about opioid safety in patients with non-cancer pain. In this study, 6300 patients taking one of five analgesics for chronic (non-cancer) pain were followed between 1996-2005.

Rus Portenoy, Chair of Pain Medicine and Palliative Care at Beth Israel Medical Center in NYC and former President of AAHPM responded to the study with caution, recognizing the confounding factors that could influence the data – including clinician knowledge of effective and safe opioid titration rates.

In the same journal, Daniel Solomon and colleagues evaluated the safety of opioids compared with NSAIDS and coxibs in elderly patients with arthritis, and finding that patients on opioids had higher incidence of falls, cardiovascular events, hospitalizations and all-cause mortality. 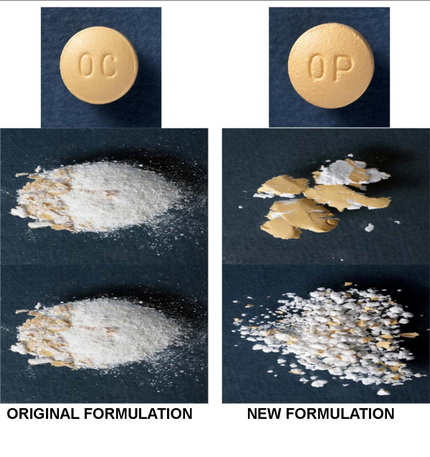 The study was released 9 months after Purdue announced its reformulation of Oxycontin, a move made to attempt to prevent abuse. The new formulation makes crushing the pill difficult: instead of turning to a fine powder, it gelatinizes. Despite its release in April, patients have only started to routinely receive this new formulation in the last 6 weeks or so. Since that time, a MedWatch alert has already been released, announcing:

The following events have also been reported, potentially due to the swelling and hydrogelling property of the tablet: choking, gagging, regurgitation, tablets stuck in the throat and difficulty swallowing the tablet.

Furthermore, alive on the webchats, patients have discussed lack of efficacy of the new formulation, increased side effects – including GI symptoms and new headaches. As a physician prescribing Oxycontin, I have had patients whose breakthrough opioid demand increased dramatically with the change in formulation, with or without the other stated side effects. My approach has been to convert the long-acting oxycodone to another opioid in each case: to methadone or morphine extended release, based on patient’s pain pattern, history of opioid side effects and using principles of opioid conversion.

I wonder whether others of you have had any recent experience with this and how you are addressing the concern.

So far, my experience with these problems has only been related with patients whose Oxycontin requirements were exceptionally high (> 1 g per day). My concern with what I am starting to see is the risk of undertreatment of pain – the potential assumption that patients who have been on higher doses of Oxycontin for a longer period of time might be labeled as “drug seekers” if they suddenly have an increased need for breakthrough pain medication due to lower efficacy of Oxycontin.

Pain and palliative care physicians may be increasingly under the gun to teach our colleagues, make our EDs, oncology and primary care centers aware of this possibility, educate about safe opioid conversion practices, and alert the FDA of observed side effects or change in efficacy through the MedWatch mechanism.

Christian Sinclair is a palliative care physician who blogs at Pallimed.

How the reformulation of Oxycontin has affected patients
3 comments