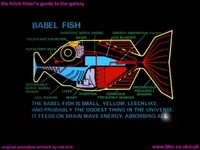 In The Hitchhiker’s Guide to the Galaxy, the Babel Fish was a fish you stuck in your ear that allowed you to understand any language spoken to you. We’re not far off.

Google recently released a new version of their (free!) Google Translate app for Android phones, featuring conversation mode, which allows you to have a back and forth conversation with someone who speaks another language (currently just English/Spanish is supported). Translation companies should be shaking in their boots.

I created a quick little demo below, on how you could actually use this (or a future version) in your clinical practice. It’s pretty incredible. (Also, a quick shout out to the web version of Google Translate, which will allow to translate any text or website into your native language (not just English/Spanish). Very useful for typing up basic discharge instructions for languages with which you’re not familiar.)

Graham Walker is an emergency physician who blogs at The Central Line, the blog of the American College of Emergency Physicians.  Reprinted with permission from the ACEP.