The FDA has declared war on acetaminophen, with Vicodin and Percocet being collateral damage.  You can bet Dr. Gregory House is sweatin’ pretty hard over this news. 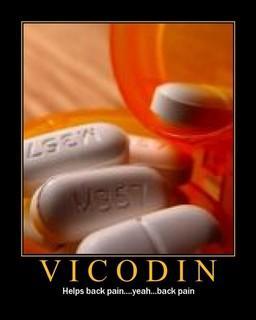 In the last few days, acetaminophen, otherwise known as the brand name Tylenol, has been squarely in the FDA advisory panel’s crosshairs. In general, it’s a very safe medication, but there is concern about liver damage in high doses.

Vicodin and Percocet combines acetaminophen with a short acting narcotic, and is a favorite among those who divert drugs.  There is a high potential for dependency.  I’m predicting their street value is pretty much exploding as I type this.

In a 20-17 vote, the advisory panel determined that they should be pulled off the market entirely, which is big news considering they are among the most widely used drugs in the United States. In a separate vote, the panel, at minimum, wants a black box warning on these drugs if they remain.

There is going to be huge opposition to this, mainly from pain management specialists who use both Percocet and Vicodin for controlling “breakthrough” pain. It’s likely that oxycodone, Percocet without the acetaminophen component, will skyrocket in use.

In another vote, the maximum dose of acetaminophen, typically 4 grams per day, will be lowered. Of course, the panel didn’t give what the new maximum would be, so that’s really not helpful information for practicing doctors.

And furthermore, expect that the one gram dose of Tylenol to be only available via prescription.

I find it somewhat odd that so much attention is focused on acetaminophen, since it’s one of the safer drugs out there. In fact, although I don’t readily have the data, NSAIDs like Aleve, Motrin or Advil, along with aspirin, probably are more dangerous drugs because of their bleeding risk and potential to cause ulcers.

If I were the makers of those medications, I wouldn’t be resting too easy. They could be next.

Reader take: Moral hazard, and whether patients should consider cost in their health care decisions

Vicodin and Percocet banned and taken off the market, or is a black box warning more likely?
47 comments