A 31-year-old woman with cyanotic congenital heart disease is evaluated during a routine examination. She has Down syndrome and is accompanied by her guardian. She has never had cardiac surgery and has no symptoms.

Her blood pressure is 110/80 mm Hg bilaterally. The cardiac apex is displaced. A left parasternal impulse is present. There is a normal S1. The pulmonic component of the S2 is increased. A grade 1/6 to 2/6 holosystolic murmur is noted at the left sternal border. There is no change with respiration. Digital cyanosis and clubbing are present. The rest of the examination is unremarkable.

The physical examination, electrocardiographic, and chest radiograph findings all suggest the presence of Eisenmenger syndrome. Eisenmenger syndrome is a cyanotic congenital heart disease characterized by irreversible pulmonary vascular disease due to the presence of a long-standing cardiac shunt with eventual reversal of the shunt. This diagnosis is supported by the patient’s cyanosis, clubbing, evidence of right ventricular hypertrophy, and decreased pulmonary vascularity on the chest radiograph.

Patients with aortic coarctation generally have hypertension in the upper extremities, a systolic murmur, or continuous murmur in the region of the left infraclavicular area or over the left back. Lower extremity pulses are reduced and there is generally a delay between the palpated radial artery and the femoral artery pulse. The electrocardiogram in a patient with aortic coarctation usually demonstrates left ventricular hypertrophy. The chest radiograph demonstrates a “figure 3 sign” in the region of aortic narrowing and rib notching due to collateral blood flow.

Patients with Ebstein anomaly characteristically have variable degrees of right heart enlargement and features of severe tricuspid valve regurgitation. Cyanosis can result from a right-to-left shunt at the atrial level in patients with an atrial septal defect or a patent foramen ovale and severe tricuspid valve regurgitation. The characteristic electrocardiogram in Ebstein anomaly demonstrates very tall and peaked “Himalayan” P waves. The QRS duration is usually prolonged; a right bundle branch block pattern and preexcitation may be present. The chest radiograph shows right heart enlargement with a globular cardiac contour and clear lung fields. The pulmonary arteries generally appear small.

Breast reconstruction: Has the pendulum swung too far the other way? 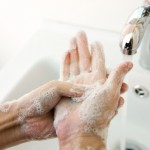