Caster Semenya is the South African track and field star who recently was engulfed in controversy at the recently concluded World Track and Field Championships. 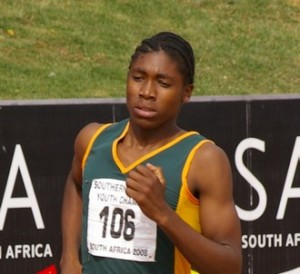 Turns out, there are some who are questioning her gender, and subsequently, tests are being conducted to see if she is really a woman.

It’s not as cut and dry as it appears.

Consider the possibility of androgen insensitivity syndrome (AIS), where, according to this piece in TIME.com, is “a condition in which a genetic male is resistant to androgens, the male sex hormones that include testosterone. In such cases, the testes never descend from the abdomen and the genitalia may resemble female genitalia.”

With one’s body insensitive to testosterone, more is subsequently produced. But there is little data as to whether this increased level of testosterone confers an athletic advantage.

In fact, if Miss Semenya really had AIS, it’s likely that she, along with her doctors and family, isn’t even aware of it. According to Rob Ritchie, a urological surgeon at Oxford University, “It is quite common for neither an individual with AIS nor her parents to realize that she is genetically male. Indeed, AIS is sometimes diagnosed at fertility clinics only when women seek help because of their inability to become pregnant.”

This is a sensitive situation for Miss Semenya, whose life may be irrevocably altered by the test findings. Add in the fact that the world is speculating about whether she is indeed a female or not, will only add to the challenges that are not of her own doing.

Would you rather have an older or younger trauma surgeon?

Drug company ethics and the pharmaceutical industry's pursuit of profit

Is Caster Semenya a woman, and the issues surrounding androgen insensitivity syndrome
14 comments