Religious and spiritual experiences have shaped my worldview since I was a teenager. At age 13, I celebrated my bar mitzvah. Later that year, I underwent an appendectomy. A priest asked my mother if he could pray for me prior to the operation. My mother did not hesitate to accept the priest’s blessing. I learned at an early age that prayers for one’s well-being should be welcomed regardless of the religion of the sender and recipient.

When I was a resident, I was asked to see a patient who was refusing a potentially life-saving blood transfusion. Her refusal was based on religious grounds. I asked her to consider whether God might sometimes heal through doctors. I believe physicians can legitimately claim to be a religious conduit to help guide patients’ decisions about life-saving treatment.

I was once consulted about an elderly Black woman experiencing somatic delusions. She complained of bizarre physical sensations that were allegedly due to rootwork, a type of voodoo specific to the African-American cultural heritage of spirituality and religion that continues to influence the health behavior of Black Americans, especially in rural areas of the south. Unfortunately, I was not able to help this woman with traditional psychiatric treatment. I referred her to a healer experienced in “roots” medicine.

Whether or not physicians are religious or do not consider religion an important component of treatment, they should keep in mind that most patients value incorporating religion and spirituality in their treatment plan. In 1995, the World Health Organization declared that spirituality is an important dimension of patients’ quality of life.

If physicians do not understand their patients’ religious and spiritual convictions, they may be less effective in helping them. This point was well-documented in The Healing Power of Faith: Science Explores Medicine’s Last Great Frontier by Harold G. Koenig, MD. The book focuses on the impact of traditional religious faith and practice on physical health and emotional well-being and presents concrete data showing that religion and spiritual-based beliefs are important dimensions of healing.

For example, medicine is replete with anecdotal evidence from patients claiming, “I could not have done it (quit substances, recovered from illness or surgery, beat cancer, etc.) without God’s help.” Religious individuals with a strong social support network often have their diseases diagnosed earlier, become actively involved in their treatments, and follow their physicians’ instructions more closely than non-religious people. Religious people also cope well with stress, are less likely to be depressed and hospitalized than their nonreligious counterparts, have a stronger immune system, and live longer, according to Koenig’s research.

Individuals with strong religious convictions tend to avoid unhealthy habits and lifestyles. This leads to lower rates of pulmonary disease such as emphysema and lung cancer (due to smoking), lower levels of liver disease such as cirrhosis (from alcohol use disorder), and significantly lower levels of other substance-induced disorders compared with the general population.

Many doctors believe that providing medical treatment in connection with their own spirituality improves their care. An article in JAMA urged doctors to pay attention to the spiritual aspects of their calling. Spirituality can be defined as “a dynamic and intrinsic aspect of humanity through which persons seek ultimate meaning, purpose, and transcendence, and experience relationship to self, family, others, community, society, nature, and the significant or sacred. Spirituality is expressed through beliefs, values, traditions, and practices.”

Studies suggest that over half of Americans want their doctors to speak to them about spiritual aspects of health. For many patients, faith-based medicine fosters a stronger relationship with their doctor and provides comfort in the face of chronic diseases, chronic pain and addiction. Many doctors now include faith as part of their bedside manner. At the same time, physicians must become aware of instances when patients are uncomfortable with the subject of faith and be careful not to proselytize or push their beliefs on patients.

Francisco Rosario, MD, is an internal medicine physician who has worked in New York for over 20 years. He says, “The new trend is trying to incorporate the spiritual into medicine,” including praying with patients. Having faith in God (or whatever deity or spiritual essence you believe) is what makes the practice of medicine still an art despite tremendous progress in the science of medicine.

Although many physicians believe religious commitments are fine as personal values, they have segregated religion from their practice because they feel it is improper to mix the two. This type of thinking stems from the outdated doctrine that one’s religious commitments should not interfere with standard medical care and that comingling personal beliefs with medical practice are not what medical authorities or patients expect of physicians. Increasingly, however, physicians find that ethos unsatisfying spiritually and intellectually. They have come to recognize that health and well-being are optimized by combining the best science and religion offer.

There’s a classic “Gates of Heaven” joke about a man who drowned that I’ve sometimes told to skeptical colleagues and patients (obviously, jokes aren’t right for everyone). The joke goes like this:

A fellow was stuck on his rooftop in a flood. He was praying to God for help. Soon a man in a rowboat came by, and the fellow shouted to the man on the roof, “Jump in; I can save you.” The stranded fellow shouted back, “No, it’s OK, I’m praying to God, and he is going to save me.” So, the rowboat went on.

Then a motorboat came by. “The fellow in the motorboat shouted, “Jump in; I can save you.” To this, the stranded man said, “No thanks, I’m praying to God, and he is going to save me. I have faith.” So, the motorboat went on.

Then a helicopter came by, and the pilot shouted down, “Grab this rope, and I will lift you to safety.” To this, the stranded man again replied, “No thanks, I’m praying to God, and he is going to save me. I have faith.” So, the helicopter reluctantly flew away.

Soon the water rose above the rooftop, and the man drowned. He went to heaven. He finally got his chance to discuss this whole situation with God, at which point the man exclaimed, “I had faith in you, but you didn’t save me. You let me drown. I don’t understand why!” God replied to this, “I sent you a rowboat, a motorboat, and a helicopter. What more did you expect?”

How to deal with challenging patients

Absent-Father Syndrome: Overcoming the trauma of a fatherless childhood [PODCAST] 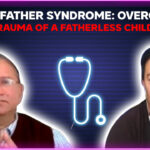