Pele, the famous Brazilian soccer star, reportedly stopped medical treatment for colon cancer. Media outlets stated he was receiving various iterations of comfort, hospice, and palliative care which were perceived as criminal and disrespectful. His daughter denied these allegations on Instagram.

How often are those with serious illnesses treated like criminals for wrongdoing?

When medical treatment is withdrawn or withheld, it seems the person has lost the battle or chose not to fight. “Ain’t it a shame” reverberates around the airwaves and within the person, especially after declaring to beat the odds. Self-esteem and others’ respect is difficult to realize.

We might learn to earn end-of-life respect by adopting a new language beyond medical terminology while speaking about the “stages” of a serious illness in the context of an advance directive. How would Pele like to be respected at this stage of life? Is his medical condition treatable, incurable, or terminal? What does he value? What are his wishes?

If Pele’s colon cancer is incurable, it’s reasonable to stop treatment. He mostly values self-determination. And he wishes for person-centered care if taken to the emergency department. This means he prefers to not hold out hope and refuse hospitalization, maintaining control of his situation and medical decisions.

If Pele were eligible for Medicare, he would choose “Medicare Advance Directive C” during enrollment. Pele is not a U.S. citizen, and U.S. seniors are not given an opportunity to choose an advance directive at enrollment. Congress needs to enact end-of-life respect through legislation requiring seniors to be informed of self-determination with critical medical decisions each year.

If I were treating Pele in the ER, I would immediately know that his “Medicare Advance Directive C” means his goals of therapy align with outpatient palliative services. We might treat an infection with a single dose of IV antibiotics followed by pills or infuse a bag of IV fluids if dehydrated. Admitting him to the ICU for sepsis would go against his wishes. And cardiac resuscitation is out of the question.

Taking the mystery out of what patients want at any crisis moment is the goal of advance care planning and advance directives. Removing the fear of life-and-death situations necessitates people making their wishes known.

When 70 percent of people wish to die at home, and 70 percent of patients die in medical facilities, fear gets the best of 40 percent of those who experience a medicalized death. Some 30 percent prefer to fight to the end, while the remaining 30 percent receive comfort care. Ideally, Medicare would support the 40 percent of seniors who desire end-of-life respect given by palliative services.

Palliative care is often linked with hospice, but this doesn’t serve those who want nothing to do with hospice. “They’re not there yet,” nor are they actually dying. People receiving palliative care are disrespected when misinformed medical providers and the media link it to hospice.

Like emergency medicine, palliative care is ill-defined. As an emergency physician, I’m often asked what I do. Am I a surgeon or a general doctor? Am I a trauma physician? Oddly, I’m like a palliative physician who manages serious illnesses with comprehensive outpatient services from the beginning to the end of life. My task is to triage patients as sick or not sick, hospitalization or no hospitalization, specialist or no specialist.

Palliative services, like EMS, triage patients before arriving in the emergency department. If patients with a serious illness appear to need hospitalization, then admitting them to hospice would be the next course of action as per their wishes. Fear prompts people to call 911 before palliative services, lessening the chance of dying at home.

Joe Biden famously said, “Don’t tell me what you value; show me your budget (advance care plan with advance directive), and I’ll tell you what you value.”

While values are vague, wishes need to be specific and matched with certain goals of therapy:

Every incurable illness progresses to death. Every senior citizen faces mortality. The goal is to earn self-respect along the way. Most people don’t value hospice or palliative care until the end. Medicare can empower seniors by simplifying the terminology of medical, hospice, and palliative care respective to hospital, home, and outpatient care.

We might be clear about how we label advance care plans with this outline:

Home-centered care: Dying of a terminal illness (precious) – Loved one

Hospital-centered care permits physicians to think, say, and do for the patient.

Home-centered allows families to think, say, and do for their loved ones.

Person-centered care allows persons to think, say, and do for themselves.

As Pele’s currently being treated for COVID in a Brazilian hospital, his end-of-life respect, like many seniors, seems to be guided by fear-based happenstance rather than an advanced care plan. We might honor his passing legacy with the goal of making our wishes known at the time of Medicare enrollment, beginning each New Year with the end in mind.

Kevin Haselhorst is an emergency physician and author of Wishes To Die For: Expanding Upon Doing Less in Advance Care Directives.

How a positive staff helped an uncertain hospital stay [PODCAST] 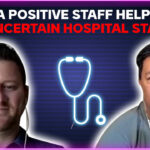 How to deal with challenging patients