Suicide isn’t beautiful. It’s not glamorous. It’s not Virginia Woolf, with pockets full of stones walking calmly into the water surrounded by trees and dappled sunlight with string music playing in the background as you slowly sink under the water.

Suicide is blood and vomit pouring out of your nose. It’s losing control of your bladder and bowels and soiling yourself. It’s blood all over the bathroom floor. Or, it’s bits of blood, brain, and bone sprayed against a wall, all over the front seat of a car, the back porch, or soaking into the bedroom mattress. And, do you know, those small pieces of bone and brain, even blood spatter, can be found days, weeks, months later, even after a major clean-up?

I’ve written in passing about thinking about suicide when I was in my late teens. Nothing major had happened. I was just going through the trials of being in that in-between state when you’re not a child but not an adult. You want to be independent, yet you still need that family support. You want everything in life; even the smallest disappointment can feel like the world just ended.

But, the more I researched methods, the more I started to think about the aftermath, which I think gets forgotten. Of course, you’re dead, so you really don’t care at that point, but I did. I started reading about what happens when you die and got totally grossed out. Pills, cutting, guns. Each brings its own problems with messiness. So, you start to think that the bathtub is the way to go. Easy to clean, right?

Then I thought about who would find me. No matter where you did it, eventually, someone would find you. Unless, of course, you went out into the woods or desert. But then maybe no one would find you, and you’d return to the earth and be a feast for worms and bugs, vultures and coyotes and yuck.

Obviously, I put too much thought into it, which maybe was a good thing because the more I thought about it, the more life continued on, and some of it wasn’t that bad. And suddenly, more good things happened, which made up for the disappointments which became more reliefs because if this or that had happened, then this or that other thing wouldn’t have happened, and they made life so much better.

I wish I could have told this to that 20-something I treated who decided that life was no longer worth it, whom I worked on for probably 30 minutes longer than I should have only because they were so young. I’m sorry you couldn’t see beyond the events of that day.

I’m sorry your parents had to find you, dead and soiling yourself but still warm enough to think there might be some hope of life yet. My EMTs tried. My techs tried. I mentally thought about every medication and process to see if we could bring you back, but that last scan of your heart showed that image that I call “silent snow” that tells us that there is nothing left to do but continue to try to understand the why.

Veronica Bonales is an emergency physician.

When was the last time you wore a white coat? 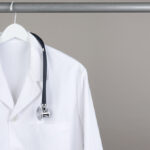 Love that allows a grace-filled release

Suicide isn’t painless for those left behind
2 comments