For me, the cheerful musical sounds of the holiday season invariably give way to a somber song: Gil Scott-Heron’s “Winter in America.” Dubbed the “Godfather of Rap,” Gil Scott-Heron (1949-2011) embraced diverse musical styles alternating between jazz, blues, soul, and hip-hop. He wasn’t known for delivering good tidings as much as he was for sermonizing and engaging in “Small Talk at 125th and Lenox,” inquiring, “Who’ll Pay Reparations on My Soul?”

“Winter in America” appeared on Scott-Heron’s 1975 album The First Minute of a New Day, a collaboration with his college classmate Brian Jackson, who was also musical arranger, pianist, and flautist. “Winter in America” the song is often confused with “Winter in America,” the record album released by Scott-Heron and Jackson a year earlier; however, the song had not yet been written, so it is not found on the album that bears its name. Both the song and the album deal with socially conscious, racially-tinged themes affecting the plight of marginalized African Americans and urban dwellers in the late 1960s and early to mid-1970s.

Scott-Heron would often introduce the song “Winter in America” in concert by saying that winter “got mad” and decided to stay, pushing aside the other seasons, not in terms of the climate but rather the philosophy, politics, and psychology of the day. Scott-Heron believed America was at a standstill, a time when “all the healers have been killed or been betrayed.” It was a time when no one was fighting for socio-political causes because “nobody knows what to save.” “Winter in America” became a metaphor for frozen dreams, promises, and aspirations — dashed hopes of meaningful societal change to overcome racism and other forms of oppression.

Fast-forward almost 50 years and we have yet to realize brighter times and warmer days. Physicians have become enslaved by systems of all kinds, ranging from electronic to corporate. Approximately 20 percent of physicians will leave medicine within two years. Most practitioners acknowledge suffering some form of moral injury during the pandemic — trying to do their best but stymied by those in power, much like the healers in “Winter in America” who felt betrayed or “were sent away.”

To be clear, “Winter in America” was not written with the medical profession in mind. However, the politically charged nature of the song speaks to themes of governance apropos medical practice. As I have maintained elsewhere, politics and politicians have come to dominate medical agendas, controlling what passes for scientific fact and “evidence.”

“Winer in America” foreshadowed the politicization of medicine insofar as Scott-Heron noted that the Constitution was merely a “noble piece of paper,” not unlike practice guidelines that have been discarded due to science denialism. Black poets like Gil Scott-Heron were the news-givers of his era because they believed their stories were not covered truthfully by the mainstream media.

Scott-Heron’s “H2Ogate Blues” targeted “King Richard” Nixon (among other autocrats). The song asks, “Just how blind will America be” to trickery and dishonesty in politics? Do we not sometimes wonder the same thing about individuals in charge of health care policy, given the widening gap in health inequity in the United States today?

“‘B’ Movie” and “Re-Ron” heavily criticized Ronald Reagan’s economic initiatives and his 1984 re-election campaign. Health care was negatively impacted by Reaganomics. As noted by music analyst Ben Sisario, “With sharp, sardonic wit and a barrage of pop-culture references, [Gil Scott-Heron] derided society’s dominating forces as well as the gullibly dominated.” However, the elderly, disabled, young children, and the poor all suffered under the Reagan administration’s cost-cutting policies. They were helpless victims too innocent to be considered “gullible.”

Scott-Heron’s biting commentaries were delivered through a broad lens of poetry, novels, and song lyrics. Many were relevant to medical practice. Topics included social injustice (“Whitey on the Moon”), civil rights (“Johannesburg”), substance use (“Angel Dust”), and nuclear technology (“We Almost Lost Detroit”). Some of Scott-Heron’s most memorable performances occurred in 1979 in a series of anti-nuclear themed concerts in New York City organized by the likes of Jackson Browne, Bonnie Raitt, and John Hall under the auspices of Musicians United for Safe Energy, a.k.a. the MUSE “No Nukes” benefit concerts.

While doctors were not directly the subjects of Scott-Heron’s songs, they figured prominently in a few, most notably “The Bottle.” The song is told via a series of vignettes connected only by alcohol. A young boy running scared from his drunken father; a woman turning to alcohol and violence after her boyfriend is imprisoned; and (seemingly) an abortion doctor drinking away his shame:

He wuz a doctor helpin’ young girls along

If they wuzn’t too far gone to have problems.

But defenders of the dollar eagle

and now he’s in the bottle.

Although Scott-Heron was keen to point out the harm of addictive substances, he was unable to resist the urges himself. In “Home is Where the Hatred Is,” Scott-Heron delivers a sobering reality check to anyone who has struggled with addiction and to their healers: “You keep saying, kick it, quit it, kick it, quit it. God, did you ever try to turn your sick soul inside out so that the world could watch you die?”

Scott-Heron did try to quit drugs (mainly crack cocaine), but unfortunately, substance use overcame him and imploded his career. Whereas he recorded over a dozen albums between 1970 and 1982, Scott-Heron released only two albums thereafter. He rarely performed in his later years, partly because he was incarcerated and because his teeth were missing and decayed (likely due to cocaine) which affected his pronunciation.

The exact cause of Scott-Heron’s death in 2011 was never revealed, but he disclosed in a 2008 interview with New York magazine that he had been living with HIV for several years. In “I’m New Here,” his final recording made a year prior to his death, Scott-Heron penned, “New York is Killing Me,” hinting at physicians who underestimated his condition: “Bunch of doctors coming round, they don’t know that New York is killing me.”

Scott-Heron was honored posthumously with a Grammy Lifetime Achievement Award in 2012, and in 2021 he was inducted into the Rock and Roll Hall of Fame as a recipient of the Early Influence Award.

“Winter in America” — the song and the album — is considered one of the greatest political statements on record, literally and figuratively. According to the British journalist and author Dylan Jones, “Scott-Heron was Curtis Mayfield, Malcolm X, and James Brown rolled into one: radical campaigner, accomplished musician, professional nuisance, compelling poet.” No doubt he would have made a formidable physician as well.

Love that allows a grace-filled release

Don’t make this mistake with gratitude 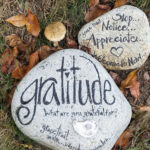