It does not behoove us to mince words in a politically charged climate. To productively discuss any controversial topic, we must first define terms and get past the jargon and doublespeak that commonly muddles conversations on serious issues. The Oxford Dictionary defines euphemism as “a mild or indirect word or expression substituted for one considered too harsh or blunt when referring to something unpleasant or embarrassing.” We often use euphemisms to soften the blow of unfortunate news or replace language that can be off-putting or displeasing. However, the words we use often convey the same deep meanings even when we replace them with less polarizing alternatives. We may dress them up or change them to something more palatable, but the meaning behind them remains the same. Paul Johnson once said, “Euphemism is a human device to conceal the horrors of reality.” Sociopolitical movements often use heavy euphemistic language to push agendas. One of the most prominent of these movements is the pro-choice movement.

The term “pro-choice” is a self-endowed moniker abortion advocates use to describe themselves. The use of this euphemism is very telling regarding the realities of abortion. D.Q. McInery once wrote, “The user shapes language, but language shapes the user as well. If we consistently use language that serves to distort reality, we can eventually come to believe our own twisted rhetoric.” The arguments made by abortion advocates are libertarian in nature. Still, they are hypocritical in that they reject similar philosophical stances in many other aspects of life, such as COVID vaccine mandates and mandatory lockdowns during the pandemic. Furthermore, the pro-choice movement usually ends with abortion as the preferred choice, while the movement rarely advocates for viable alternatives.

Planned Parenthood’s website lists abortion as “a medical procedure that ends a pregnancy.” Calling abortion a “medical procedure” is a euphemism that hides the profound implications of the act. According to Ann Reynolds from LiveAction, “If a person is experiencing painful gallstones, removing the gallbladder is a logical choice. If a woman is experiencing dangerously elevated blood pressure, septicemia, or cancer while pregnant, inserting instruments into the woman’s body and violently taking apart a living human being and then extracting the pieces of that human being is not a logical response.” In a pharmacological abortion, Mifepristone inhibits the signals of pregnancy hormones, causing the uterine lining to degrade. Misoprostol works in concert to dilate the cervix and induce muscle contractions that clear the uterus. Vacuum aspiration is an in-office procedure in which the cervix is manually or pharmacologically dilated. Then “gentle” suction is used to aspirate embryonic/fetal contents. An inventory is then conducted to ensure all the components of the embryo/fetus are present. These are graphic descriptions but are imperative to understand the nature and intent of the act.

The pro-choice camp often uses another euphemism for abortion: “health care.” This term sounds benign enough, but it conceals something more ominous. According to ACOG, “Facts are essential, especially when discussing women’s health and the American public. The fact is, abortion is an essential component of women’s health care.” Essential? Health care is the organized provision of medical care to individuals or communities. The intrinsic purpose of health care is to enhance and sustain life. If you disregard the result of the procedure, one could consider it health care. However, two patients are in the equation when a woman is pregnant. A medical procedure that eliminates one of the patients is not health care. Therefore, calling an abortion “health care” is an attempt to skirt the reality of the act committed.

Calling abortion a “reproductive right” is another attempt to turn the pernicious into the benign. Abortion is not about reproduction. Reproduction means “to make again,” referring to humans creating another human being. Actual reproductive rights precede the act of reproduction, and no one believes the right to reproduce should be stripped from anyone. However, an action taken against the product of reproduction is no longer related to reproductive rights. Abortion is a parental act and not a reproductive one. Using the term “right” regarding abortion is a misnomer in and of itself. Abortion advocates often rank this in the pantheon of constitutional rights, including free speech and the right to life. These rights are derived from natural law, meaning they are self-evident and implied by our very nature. When advocates label abortion as a self-evident right, they are not required to defend its morality. This is advantageous to them as abortion does not hold up to any close moral scrutiny.

As humans, we are very adept at lying to ourselves and others. We do this to rationalize our actions and avoid harsh realities. Calling abortion a reproductive right, health care, a procedure, or a woman’s choice is an attempt to conceal the truth. Abortion is an intentional act that results in the death of a human when it happens to be at its most vulnerable. If abortion is morally and pragmatically OK, why do we need to use alternative terms when describing it? If we remove all the euphemistic language, we are left to confront what is genuinely happening, the end of human life. Maybe we should stop the word games and embrace the uncomfortable. Honest conversations can then begin.

What my 10 year old is teaching me about boundaries [PODCAST] 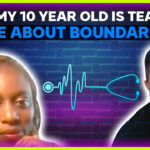