“Holly, we’re really worried about you. You’ve been sleeping for days. Let us take you to the school clinic.”

I looked up at a figure in the bedroom door surrounded by a light that hurt my eyes.  It was my college roommate, a sweet girl from North Carolina who had put up with my shit for most of our senior year.  I wanted to bounce up and smile, to jump into my dance gear and go to modern dance class, or shrug into my baggy jeans and Doc Martens for a trip to the quad, but my body was so tired, and my lower back was hurting. I’d been seen at the school clinic and treated for sinus infections and viruses, but I only felt worse and more run down. It was my senior year at Duke University, and I should have been celebrating and partying. My medical school interviews were complete, and I had more than one place to choose from for the next stage in my journey to becoming a real adult.

But here I was, in bed, exhausted with no identifiable cause. The next few days were a blur as my physician father intervened to get me seen by numerous specialists.  I remember being poked, prodded, and left in cold exam rooms alone in a hospital gown with no real conversations or in-depth inquiries being made. I don’t remember any of the doctors’ names, and I am sure they forgot mine soon after I left their exam rooms. I felt myself being discussed as I sat there on display like a not-so-sexy supermodel. My arms were bruised from the multiple blood draws, and my body ached as my well-meaning parents pulled me in and out of appointments.

The only physician who stands out in my memory was a rheumatologist. I remember my mom prepping me for the appointment. “Your dad said he’s going to talk to you a lot at first. He’ll want to know everything about what’s been going on.” Mom sat with me for this appointment, which was noticeably different from the rest. We sat in his office with me fully dressed, my dignity intact, as he asked for a detailed history of my family and me. There was a lot of nodding and understanding. I felt seen and heard. I was able to tell my story and hear details about my history from my mom’s perspective. That doctor found the potential for autoimmunity and kidney issues, which led to my mom saying she’d give me one of hers if needed.

For years I rarely glanced back at that time of loneliness and uncertainty. I viewed it through a fog of defenses that had blurred the pain and loneliness I felt for months on end. Now, approaching my fiftieth year in this lifetime, I am reminded of how isolated that 21-year-old felt. How despondent she was on her 23rd birthday when she was gifted a letter from her medical school inviting her to withdraw for the remainder of her first year, to come back to start over once her health had improved to a point that she could fully contribute and engage in her learning. The rejection she experienced when neurology residents sneered upon learning she had been (mis) diagnosed with fibromyalgia – a newer diagnosis at that time which had become a modern-day hysteria, a throwaway diagnosis for whiny, unhappy young women from whom many doctors did little to hide their lack of empathy.

At that same time, many well-meaning medical school attendings brought me in as a patient to poke and prod to rule out multiple sclerosis, SLE, and RA. I tried every nonsteroidal anti-inflammatory, and I was the canary who sang, informing my classmates that Ultram had elements resembling opiates and could make you feel high. I learned that trazodone makes pain medication not work as well when my newly diagnosed kidney stone wasn’t touched, and another attending schooled an arrogant resident who questioned my honesty.

One would think being a patient with chronic pain in a class of 100 future doctors would allow my classmates to benefit from my experiences and perhaps gain empathy. Sadly, that was not the case for most of my schoolmates. Medical school was geared to take the best and brightest and put them in a small arena, vying for the limited attention from professors and staff. Any weakness was seen as a manipulation or a way to cheat someone else to get ahead.  I cringe when watching the assumed exaggerated dramatization of students attacking each other on TV shows such as Yellowjackets, knowing this can and does occur every day on a social level in medical schools and pre-medicine programs. I received little help or kindness as I struggled with excess fatigue and increasing pain.

In fairness to my classmates, I also had no real mentor or staff to rely on as I redid small groups and tutorials during my repeated first year. Attempts to joke about it were met with suspicion and were called out in my individual grading sessions. Interestingly, those sessions were only individual for the student. We were generally outnumbered by critiquing staff three to one and not allowed to speak as they tore apart any surviving remnants of our egos.

The isolation that happens during medical school was amplified by the seclusion I felt as a patient. I spent many nights alone researching potential diagnoses mentioned by classmates, resident physicians, or my doctors. I experienced physical addiction to muscle relaxants I unintentionally misused for sleep because my treating physician never educated me on the potential for physical reliance.

In residency, I gained a deep understanding of rebound headaches in my attempts to control stress-induced migraines with numerous pain medications.  All the while, I attempted to advocate for patients I recognized as members of my pain and suffering tribe, only to be ridiculed and scapegoated by colleagues and attendings.

So now, at age 49, I scoffed at a colleague’s suggestion that perhaps my undifferentiated connective tissue was something else, not realizing how dense the fog of defenses against my previous suffering had become. At some point, I had become comfortable living in the space of not having a recognized diagnosis. This allowed the blossoming of my avoidance of past traumas I experienced while receiving care. I rarely spoke of my chronic pain or episodic fatigue and found symptom improvement through diet, exercise, and my evolving spiritual practice.  It took months of hearing others mention hypermobility before I revisited the possibility. As I contemplated reentering the journey as an undiagnosed patient, I recognized that I did not travel alone this time.

Her small hoarse voice still rang in my ears these years later. I still see her sad eyes as I shake her awake from her sudden slumber over her third-grade homework. Her tears of frustration burning through brain fog clouds are etched into my memory.

My daughter Maeve was just eight years old when I reached out to our pediatrician and pushed our way to various specialists until her thyroid autoimmunity was discovered.  We initially managed her symptoms with medication and vitamins but recently observed a return in memory lapse and intermittent fatigue. As a physician, I knew her overdue growth spurt and entry into tweenhood could be contributing factors. I willingly entered mom mode when asking her doctor if he thought she needed further evaluation.

I floated between my roles as patient, physician, and mother. My eyes stung with the frustration of navigating insurance authorizations for my own numerous imaging studies as I allowed myself to consider that a diagnosis did exist to explain my chronic pain and health concerns. I uploaded lab results collected outside my physician’s network to avoid high copays. Meanwhile, I scheduled and attended my daughter’s needed laboratory and imaging appointments, paying out-of-network costs without a thought.

“The doctor needs you to bring Maeve in tomorrow morning at 8:30.”

I struggled to hear the nurse’s instructions over my quickening heartbeat. She mentioned a multidisciplinary clinic, growing thyroid nodules, and a biopsy.  I swallowed my maternal urge to scream in despair and observed myself as I effortlessly entered doctor mode.  I immediately interpreted what I heard into laymen’s terms for my husband and our daughter’s school.

I thought back to my own school experiences, and the late morning arrivals after doctors’ appointments explored fatigue and heart palpitations. During those initial steps into my role as a patient, I was not alone. My physician father walked alongside me, helping me navigate the system that felt daunting on the best days. I remember him wearing what my mother jokingly called his doctor’s suit – a three-piece designer suit that helped him stand a little taller and speak with more authority as he made sure any treating doctor understood he was a member of their club.

I admired his ability to balance his roles as a father and physician. He spoke with confidence and authority with my treatment team and then translated everything they said for my mom and me. I sometimes wonder if I admired his ability so much that I willed myself to repeat it. The guilt of this possibility haunts me.

As I found myself carefully choosing my outfit for Maeve’s appointment the next day, I wondered if my dad had similar moments in front of his closet. Would I be able to so easily balance the command given to a physician colleague with the fear and protective heart of a mother? I sighed and knew I would. I was determined to help Maeve navigate the healthcare landscape as a young woman and to instill in her the confidence needed to advocate for herself along the way.

I turned the corner of my journey as a patient, doctor, and mother, holding my daughter’s hand, knowing we would be there beside each other no matter what our individual outcomes.

Holly MacKenna is an integrative psychiatrist.

The Christmas miracle and the music box 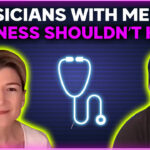 Balancing the roles of patient and healer
1 comments