Sandy was sent to me by her primary care physician for evaluation of anemia. As I reviewed her chart, I explained to the medical student that the blood work showed a lifelong benign condition called alpha thalassemia trait that she was born with. It had no potential to harm her. This would be a quick consult, meaning we would have some extra time to enjoy our lunch.

As I walked into the room, I caught her stifling a yawn. I looked at the clock to see if I had her wait for too long, but I was on time. She recognized the conundrum on my face. The following dialogue ensued:

Sandy: Hi, doc. I work overnights and just finished my night shift. Sorry, I’m a bit sleepy, but I will hit the bed as soon as I go home from here. Hope you don’t have bad news for me. Walking into the cancer center is scary. Your nurse just took my blood pressure, which has never been this high.

Me: Well, I reviewed your blood work, and you have a benign condition that you were born with. This does not have the potential to cause any problems for you. So you can go home and get your rest. What kind of work do you do?

Me: What kind of a social worker?

Sandy: I have done different kinds of social work but what I’m doing currently, for the last several years, is to work with Veterans. I’m a suicide hotline agent. I’m the one on the other end of the phone when anybody calls the 1-800 suicide hotline number, now 988.

Me: That’s very interesting! I have always wanted to talk to someone who works closely with actively suicidal people. In medical school, they teach us a little about handling such a situation, but I have never personally been involved. Tell me this: If I walk into a room and someone is standing up on a chair, with a rope around their neck, ready to kick the chair, or standing in the window, about to jump out, I would personally panic, but how should I act in such a situation?

Sandy: Well, first of all, don’t panic. Try to stay relaxed. Don’t be afraid of starting to talk to the suicidal person. Just take it easy and say something. Talk to them about anything.

Me: That would be hard, I guess. I would be too worried that I might trigger their thoughts further.

Sandy: Yes, that’s the natural way to think but just ease into the conversation. Engage them as much as you can. Ask them what’s going on. Hear their story. Offer them support and help. Try to come in the way of their suicide plan. For example, if somebody has a gun to their head, just ask them to put the gun on the floor for a minute so that you can talk.

Me: Has it ever happened to you that you were on the phone and somebody killed themselves?

Sandy: Yes. (At this moment, she sighed and put her head back, and her eyes became moist.) A veteran used to call me for support, and I had convinced him that he had to live for Arnie, his dog, for six years. He was all he had in this world. One morning he called me and wanted to say goodbye to me. I reminded him that he had to live for Arnie, and he said, “Ma’am, Arnie did not wake up this morning.” I did not know what to say, and then I heard a muffled gunshot.

Sandy: You don’t know how much I hate fireworks!

Me: What? I love fireworks. What’s wrong with that?

Sandy: I cannot tell you how many vets call me on the fourth of July. It reminds them of the bombings and killings during war. At the sound of the fireworks, their PTSD triggers. It is heart-wrenching to see grown-up men curled up in their bathtubs and crying like children. I get so mad.

Me: Wow, I never looked at fireworks that way. I never thought that fireworks could have a negative impact like that on anything.

Sandy: You know we get calls from all over the world. It is free of cost from anywhere in the world.

Me: I didn’t know that! That is amazing. But what if someone is speaking a different language?

Sandy: We have instant access to interpreters of any language, just like you do when you see your patients. But the problem is that I can talk to them but cannot send help everywhere. We are connected to the local authorities and Police in many countries but not everywhere. Have you heard of the suicide forest in Japan?

Me: Suicide forest? What is the world is that?

Sandy: In Japan, a forest (Aokigahara) is next to Mount Fuji. They say that people used to abandon unwanted children and the elderly in that forest in olden times. Now it is known for people to go and commit suicide there. They do it mostly by hanging from a tree.

Me: I wonder if other countries have places like that.

Sandy: Right here in the United States, the Golden Gate Bridge in San Franciso has recorded the most number of suicides in the world! In fact, they are trying to build suicide barriers that have still not been completed after all these years.

Me: You have such a difficult job, Sandy.

Me: Well, we are all placed in this world to do the jobs that we can. Humans are resilient. Sometimes we have no choice but to adapt to the task that we have been assigned to. People often think our jobs are depressing, but some of the happiest people I have seen are those who work with death and dying. You will never see a depressed hospice nurse, funeral director, grave-digger, or executioner. I guess the daily reminder of death prepares us well to accept it when it knocks on our door. And also enables us to live each day to the fullest since tomorrow is never promised.

Me: Anyways, it looks like I got more out of this clinic visit than you did! How much is the copay that I owe you? (We both chuckled.) I hope I can use the information you gave me someday and save somebody’s life. As for your anemia, you don’t need to see me again.

What it means to leave clinical medicine [PODCAST] 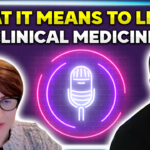 The story of a physician, after a year sober 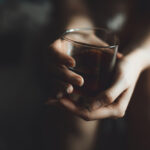