An excerpt from Doctor and Goliath.

We’ve all heard about David and Goliath, correct? In one of the most epic underdog stories ever written, a young boy defeats a giant Philistine warrior. But how did that happen? What tools did David employ to win his battle? Was it the five round stones he carried and used as projectiles to tumble the behemoth? Was it his wit? Did Goliath have vulnerabilities that David exposed and exploited?

I asked myself these questions when I first heard this story. Sure, the concept of a small boy defeating an enormous, seasoned gladiator seemed far-fetched. Nevertheless, David’s courage and strategy captivated me when I was young. Even more intriguing was that David armed himself with just five stones and ultimately needed only one to take down his mighty opponent. Legend has it that David had not only prepared himself to defeat Goliath; he also readied for his four brothers. Hence, the five stones. In short, David looked at the battle in front of him and ahead to the battles he might face even if he won.

As I got older, I searched for real-life examples to parallel the story of David and Goliath. As it turns out, they happen every day! There are Davids everywhere. Time and again, we see the underdog win, whether it’s the 1980 Men’s USA Hockey Team defeating the powerful Soviet Union team in the Olympic semifinals, in what has been called the “Miracle on Ice.” Or, the rags-to-riches story of Larry Ellison, a college dropout from humble beginnings who became the founder of Oracle and developed a net worth of $68.4 billion. Of course, those are the famous examples. More interesting than the gold medalists and self-made billionaires are the David stories in our daily lives. Take a second to look around and you might find them in your community, or even in your own family.

When you think about the story of David and Goliath, ask yourself:

We each face our own “Goliaths” every day: health scares, workplace stressors, financial burdens, societal pressures, navigating life during a pandemic, and so much more. To persevere, we call on our inner David. Even as you read this sentence, you may be thinking about your next move, how to break out and manifest your vision to realize your life’s calling.

“Have you thought this through?”; Swimming against the tide of Big Medicine

My story is about a boy who decided to become a doctor, starting with a vision that turned into a reality. To be clear, my circumstances were neither special nor unique.

Ooops. What I did have was a tenacious desire, a practical commonsense approach to business and relationships, and the will to step onto the battlefield of Big Medicine.

As I reflect on the past seven years of private practice, I think of everyone who offered encouragement. Early on, I second-guessed taking the leap; in 2014, self-employment in medicine was hardly a national trend. And in Pittsburgh, a city dominated by two health care giants, the idea of establishing an independent practice sounded insane even to me! Well-meaning friends would ask:

“Do you realize the risk you’re taking?”

“Have you thought this through?”

I would hide my conflicting feelings of confidence and terror by simply responding, “Yes.”

At the time, I existed in a state of intense motivation, interrupted by angst and apprehension. After all, I was a 32-year-old medical resident (soon-to-be attending physician) with a wife and a newborn son at home. I had spent the past 12 years preparing to become a physician, devoting thousands of hours studying the human body, and learning how to prevent and treat disease. My mentors were physicians. They taught me the art of careful history taking, savvy physical exam techniques, and how to develop thoughtful and effective treatment plans to improve the health of my patients.

What they did not teach me, however, was how to start a business! In medical school, there was no course titled Solo Practice Start-Up 101. No didactics on negotiating a lease, hiring staff, accounting, selecting an electronic medical records (EMR) system, HIPAA, or OSHA. In short, there was no course on how not to fail miserably in private practice.

Even today, years later, I see a huge gap. U.S. medical school and residency curricula are failing to prepare our next generation of physicians to become skilled business managers, investors, and leaders. Is there any wonder, then, why more physicians are opting to join Big Medicine for the security of an employed position versus deciding to hang a shingle? Is it any surprise that a 2018 benchmark survey by the American Medical Association (AMA) marked the first year in which there were fewer physician owners (45.9 percent) than employees (47.4 percent)?

Sometimes, Goliath may seem too big or the risk too real. For some, clarity and courage arrive when they realize that Goliath is not perfect or nimble. On the surface, Goliath’s size may have appeared to have been his greatest attribute. But it also made him a prime target. At first glance, the risk of entrepreneurship may seem too risky; but it could also be the most rewarding venture you’ve ever contemplated.

Justin Berthold is a physiatrist and author of Doctor and Goliath.

How whole-person care can make us better healers [PODCAST] 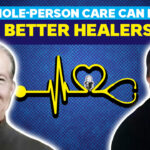