An excerpt from The Myth of Normal: Trauma, Illness, and Healing in a Toxic Culture.

Ours is a culture wholly averse to death and even aging; think of how many products are geared toward erasing or “reversing” the signs of oncoming infirmity, the physical reminders of life’s finitude. Here, then, is another sense in which healing is an upstream journey: it necessarily involves the full-hearted acceptance of the inevitability of our passing and the determination to experience all the days and moments that lead us to our earthly exit.

Some years ago, I led a retreat for people with all manner of health challenges, from mental distress such as depression through addictions to physical illness. One attendee was a sixty-four-year-old I will call Sam, with advanced ALS, that mysterious, paralyzing, and fatal degeneration of the nervous system. His form of the condition was the so-named bulbar onset type, meaning that it was not his limbs, but the muscles of speaking, chewing and swallowing that were first affected. “I … came … here,” he told the group in a voice hoarse, attenuated, and halting, “because … I want … to live.” As he described himself, his pre-disease personality lines up with what I have seen in everyone with his condition: what we have earlier called superautonomous self-sufficiency, the shutdown of feelings, and almost phobic refusal to seek help or emotional support from anyone.

After a week of intense self-exploration, intimate sharing with fellow participants as he had never been capable of, and some revelatory psychedelic sessions, Sam said he had an announcement to make. “When I first said I wanted to live,” he said, his voice notably stronger and more resonant, “I meant I wanted to live longer. I don’t see it that way anymore. I still want to live, but I now know that ‘living’ means not chronology but quality. I really want to be in my life every moment, experience what is ahead of me to the fullest, as I have never done before.” He died a year and a half later, in keeping with his prognosis. In the months following the retreat, Sam – and after his death, his family – sent messages of gratitude and celebration for the vitality, love, and joy he was able to manifest in himself and with his close ones in the final phase of his life.

The manner of Sam’s dying, measured not in numbers on a calendar but in the aspects of himself he was able to reclaim, came as close as I have every seen to what has been called a “good death.” He had not been cured of his illness, but he had healed. He had brought into harmony parts of his essence that may have remained fragmented and discordant without the unasked-for invitation his disease presented him with. He also found a way to make life-affirming meaning of what he could just as easily have viewed as cruel, destructive, or senseless – as many do view death from “untimely” illness. As his family’s later communications made clear, the meaning he made has endured well beyond his bodily existence, radiating into their own lives.

“The journey,” Will Pye said to me, “is to find the gift in the challenge. It impelled me to practice and cultivate the capacity to consciously choose the meaning of all that was happening.”

That challenge, and the gifts of self that can ensue from engaging with it, is waiting patiently for each of us in the “what’s happening” of our lives right now. The choice we have is whether to take it up now or to wait for a more urgent occasion for the learning.

Gabor Maté is a physician and author of The Myth of Normal: Trauma, Illness, and Healing in a Toxic Culture.

Coaching or mentorship: What is the solution for physicians?

All I ever wanted to be was a nurse 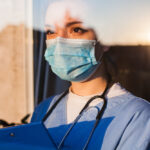