There is something to the movie The Secret Life of Walter Mitty that I just love. Every time I hear the music, I feel the sky of possibility opening as a melancholy feeling simultaneously hits. And today, while finishing my ACLS recertification, I realized another reason why: Walter Mitty finally starts designing his way forward. And you can too.

While sitting in between cases, one of my partners asked me why I went to medical school. I have been asked that question in numerous contexts. Each time, I think I give a slightly different answer. This time I said, at the time it seemed like both the brave and the safe decision at the time. Inspiring, huh? Where were the inspiration and the design?

For those of you who haven’t seen it (spoiler alert), Walter Mitty starts on a routine commute to the office in which the mundane is interrupted by Mitty’s dreams of exciting adventures and dynamic comebacks from an overbearing boss, which then fades back into the reality of his perceived life of tedium and impending firing. He is so caught up in his dream life that he almost misses out on the biggest compliment and opportunity of his life. It’s only when he starts taking the next step forward that his mind clears and his dream life begins.

As physicians, we get caught in this step. We often are already living a version of our lives that we only dreamed about as undergrads, interns, and residents, but without the inspiration. Can you remember when you dreamed of the impact you were going to have as a physician? Have you ever found yourself dreaming about how you wish things were if you had done or actually done the brave thing only to return to your current routine the same? Have you wondered if there was a dream job, career, or life for you outside of the traditional bounds of medicine and job descriptions?

I want to challenge you to remember that person who took that chance, whatever it was, and took the next step. Start prototyping your life, designing your way forward through your current challenges. We need this. You need this. Since medical school, I have heard how broken, and unsustainable medicine is. And I bet you have felt that way about your own career at some point. Maybe you do it today. And if we all take that next step, maybe we can design our way into careers and lives that are just a bit better with each step And maybe, just maybe, this can help transform medicine today.

So go watch the movie, take that next step, and start designing your life instead of accepting what is. And when you’re ready, tell me how it goes. Because I’m doing the same, and it’s scary. But the alternative is no longer worth it because my dreams keep interrupting my reality instead of the other way around.

There’s a rhythm and rush these days

Leaves you empty with nothing but dreams …

But there is a truth and it’s on our side

Dawn is coming open your eyes.

So I am opening my eyes and redesigning. Won’t you join?

Melissa Welker is an anesthesiologist.

A physician celebrates her growth

Food allergies are not a joke [PODCAST] 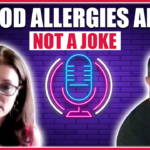