As I looked around the hot, humid room at the male doctors in their white coats, I couldn’t believe I was actually participating in a medical training mission in Rwanda. After months of planning and securing equipment, I was actually in Africa. I watched as the medical residents listened intently to the lectures United States physician volunteers provided.

Forty-two Rwandan OB/GYN residents came to the University Hospital in Kigali for a week of cervical cancer screening and treatment training to make prevention easy for women. Cervical cancer is the number one female cancer in Africa. I had one glaring observation sitting in that small room. Of the forty-two OB/GYN residents, there were only four women.

I remembered back to my U.S. medical school class, where we had 18 percent women. Thirty-five years later, that percentage has risen to 50 percent. For the specialty of OB/GYN, 85 percent of American residents are now female. I wondered why the number of women residents was so low in Rwanda. I interviewed one of the women and learned a great deal about the barriers that have nothing to do with intelligence and everything to do with biology and accommodations.

Mireille, a thirty-three-year-old Rwandan, had always wanted to be a doctor and did the hard work to be admitted. She saw it as an “important and much admired” job, and her dedication was obvious. Mireille’s husband was a resident, and they had one daughter who was four months old when she entered residency.

Mireille was lucky that she grew up in Kigali, the main city where the medical school and University Hospital was located. There would have been no way for her to train with her child living away from family. The male residents left their families in their villages as they moved to Kigali to do their training. One told me he had only spent three months with his family in eight years of training.

When I asked her why there were so few women OB/GYN residents, she said simply, “It’s too hard.” It turned out “too hard” doesn’t mean the curriculum or medicine was too hard; it was the sacrifice it demanded of women with families or desire to have a family. There were no female attendings or mentors. Night call was two or three times a week with constant deliveries, surgery, admits, no sleep, and no reprieve for 24 to 36 hours straight in high-stress situations. The female patients were happy to see a woman doctor rather than a man, so the demands on the four women residents increased.

There were no accommodations for the trainee’s breastfeeding, caring for children or parents at home, and they were told at the beginning that pregnancy was not allowed. If a woman resident became pregnant, she would have to repeat the entire year, even if she missed minimal time for delivery. In Rwanda, residents are either “private” and paying their own tuition with no stipend, or they are government-sponsored, and the tuition is paid, but they are obliged to “pay back” by being stationed in a rural health center for five years. Mireille and her husband were government-sponsored and did not know where their family would be sent after graduation. An extra year of residency would have been impossible, therefore having another baby during her prime years was also impossible.

When asked what she would change so more women could choose her specialty, she replied, “Allow us to have children. A man’s wife can get pregnant twice in the program. A woman should have that chance once.”

Things aren’t much better in the internal medicine training tract in Rwanda. There are only three women residents, highlighting a serious problem in their training pipeline. In the GYN training sessions, I noticed the women residents sat together and were shy about speaking up. I’ve also seen this in medical meetings and ward rounds in the U.S. We have learned over the past few decades that a critical mass of females is needed for women to feel empowered to speak, lead, share and support other women, as both professionals and patients.

One example of the importance of women was seen during the training clinic. A group of male doctors was huddled together, and one directed the woman patient to just “undress over there and come here to be examined.” Our volunteer woman physician decided some education for these male doctors was urgently needed. She asked Dr. L to go into the hallway and bring in all the nurses he could find. Then she asked him to undress and get into the stirrups with everyone in the room. He was horrified and practically shrunk in the corner. She then said, “That is what you just asked that woman to do.”

It was a wonderful teaching moment and the men really “got it.” But it took a woman to point it out to them. Sensitivity and appropriate medical demeanor have to be taught. And without a woman leader’s input, insensitive behavior just continues.

The problems these young Rwandan women faced juggling careers and families are universal. If one does a Google search “What is the biggest challenge facing women doctors,” the 2,530,000,000 results say:

These issues that keep women out of professions are the same everywhere, and the young women doctors in both Rwanda and the USA are still struggling with gender problems that I struggled with over 35 years ago in my own training.

Rwanda is a progressive, beautiful country that aims to provide world-class medicine. Increasing the number of women physicians overall, especially OB/GYN specialists, is essential to achieving that goal. It won’t happen without systemic changes that acknowledge the needs of young women medical students and prioritizes bringing more women into medical training. Rwanda may be a little behind the Western countries, but we haven’t solved the gender discrepancy anywhere on the planet. These are not “women’s problems.” These are human problems that need to be addressed before we can reap the benefit from half of our workforce. 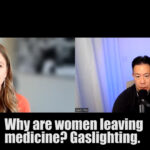 Focus on the rheumatoid arthritis patient, not on their disease