As he was being wheeled in for surgery, President Reagan joked, “I hope you are Republicans.” The surgeon, a liberal Democrat, replied, “Today, Mr. President, we are all Republicans.”

All very appropriate and from another era. As a usually intelligent and intellectual segment of society, it is not surprising that physicians should have opinions, including politics. As citizens, they are entitled to them too.

In fact, one would hope that physicians participate in political dialogue with a diversity of opinions to benefit society, their profession, and most importantly, their patients.

However, questions do arise about the manner of expression. More specifically, the impact of doctors’ statements upon their patients. Expression is of particular concern in this age of social media, be it the potential for sanctimonious rambling on Facebook or telegraphic and curt messaging on Twitter. Sans nuances and the person making the statements, opinions are fraught with the risk of being badly misunderstood. Humor comes across as “not so funny,” wit as an insult, compliments as sarcasm, conviction as extremism, and so on.

In the current environment of intolerance for opinions other than one’s own, imagine your patient reading your “strong” views on social media. Despite your capacity to put all that aside when treating a patient with views or beliefs incongruent with yours, the patient just may have ascribed all the negative traits to you that belong to members of the enemy camp.

Not just “Dr. Jekyll and Mr. Hyde,” you become the living embodiment of Hitler, Mussolini, Stalin, fascism, and communism rolled into one. Or, you are one with that tree-hugging dopehead sleepwalking everyone to ruin by handing out freebies to the parasites that are their voters. You are no longer the good doctor.

The result may be a severance of the doctor-patient relationship. It is a real shame if the patient is worse off for it from a health perspective. Goodwill and trust may be the casualty of ill-advised expression from any side.

Case in point: views for or against abortion rights or Roe v. Wade.

The differences have gone to the extremes of physicians being senselessly killed, if not harassed, just for doing their job. The other party, of course, are ignorant plebeians.

Physicians would be well advised to tread gently when dealing with hot-button issues. There is an Indo-Pakistani proverb: “When you live in the river, don’t hold grudges against the alligator.”

In that vein, one can be doing oneself no favor fervently pontificating “blue” views in the “red” locale where one practices and vice versa.

Frequently, we become different, blunt, impolite, abrasive, or confrontational in our online interactions. The dogmatic nature of statements leaves little room for being extended the benefit of the doubt.

While such behavior may be transiently gratifying, it may significantly dent one’s practice and trust and respect with colleagues and patients in the long run. The patient may find another doctor, and your miffed colleague may decide to refer patients elsewhere. The result is not just a blow to one’s practice but a deeper estrangement between opposing political camps.

By no means am I suggesting self-censorship. By all means, voice your red, blue, gray, or green views in camps flying a flag of a different color.

Remember that childhood fable about the sun and northwind making this bet, about compelling an unsuspecting traveler down below to take off his cloak? We may all agree that as bets usually go, it is all quite silly! The northwind huffs and puffs, to no avail. The sun beams warmly and, you know who won!

Opinions are not changed by sledgehammer pontification. Acknowledging the opposing view respectfully and gentler suggestions or probing may go much farther. Certainly, consider refraining from lecturing the patient or launching into a political diatribe by assuming the wretched soul on the receiving end shares one’s views or needs converting.

They come to you for treatment, not political indoctrination. The same goes for one’s colleagues. When the opportunity arises to air one’s views, why not demonstrate the gravitas expected of well-developed and well-exercised gray cells adept in the art of comprehending and explaining complex issues without talking down? Instead, we regress to become one with the name-calling schoolyard bullies. Who knows more about “nudge” being better than “steamroll”? Ever told your patient to “Just stop smoking. It is bad for you,” — wasn’t effective, was it?

Perhaps, the cure for the current social malady lies with us. As a scientific discipline, we are adept at equipoise. We must display it in our discourse. When we resent dogma in medicine, how can we pontificate like preachers when the whitecoat is off?

What if we were to concede as to the bona fides of an opposing view; express our own respectfully without condemning anyone with a divergent viewpoint as the evil denizen from the deepest pits of hell, appeal artfully not just to emotion but intelligence, and do so with integrity? Then, we would have done our overworked gray matter some justice. We would also be instrumental in initiating the cure of the prevalent malady.

As doctors, caring is our poetry

A neurosurgeon puts down the knife [PODCAST] 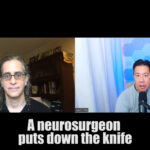