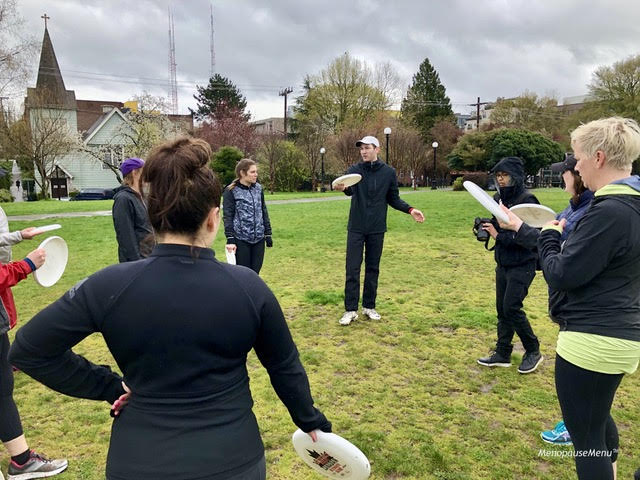 You’ve got to understand that I don’t like anything being thrown at my face.

This fear goes back to my childhood in Ontario, Canada, when after school in the winter, the neighborhood kids got together to play hockey. Our back yards abutted on a park which had a big field that, come winter, was iced over by a local parent late at night (later on, I found out he was an alcoholic and not a nice guy).

We all took turns shoveling the snow that accumulated each day, and then the rink was ours. I preferred to do my figure skating and try little jumps and twirls. The boys, however, played hockey.

It was usually a pick–up game–whoever was on the ice. Inevitably, I would be asked to play goalie. Sans mask!

This was the seventies … no fancy outfits. Ever since I flinch every time something comes toward my face quickly.

Fast forward to 2018 when I received an invitation I couldn’t turn down. Peter Shmock, former U.S. track and field Olympic athlete (shot put), had put together a hall of fame cast to lead an exclusive group of women at an event called “Women Who Throw S**t.”

Nervously, I showed up on the scheduled date at Seattle’s Cal Anderson Park. It was a typical April day in the Pacific Northwest – overcast and starting to rain.

I was ready. I had dressed in layers. I was psyched and motivated. Bring it on!

Oh yes, my other reservation (apart from intensely disliking anything being thrown at my face) was my rheumatoid arthritis and the impact it had on my hands over the past 18 years. My grip strength and dexterity were not great, and my hands were easily prone to painful injuries.

Yet, I was still ready and willing to try this whole thing out.

Our first instructor was none other than Major League Baseball catcher Dan Wilson who had played for the Cincinnati Reds and the Seattle Mariners – he was a local superstar. And a super nice guy.

He showed us how to throw a baseball, as simple as that. We got muddy in the rain but had a lot of fun. I only flinched a few times as balls went past my face.

Next up was Jack Thompson, a retired NFL quarterback who played for the Cincinnati Bengals and then the Tampa Bay Buccaneers. He had us doing drills, both throwing and catching footballs.

He apologized for being strict as he had never taught women how to throw footballs. It was fun!

Last up was Owen Freed, NCAA Ultimate Frisbee National Champion, who taught us how to throw and catch Frisbees.

Yes, everyone had previously played with a Frisbee in a backyard or on a beach. But, we learned how to do it the right way!

Two hours zipped by, and after learning how to throw a baseball, a football, and a Frisbee, we were all wet, muddy, and ready to head indoors. My extra layer of clothing came in handy.

I was sore despite preparing my throwing arm for several weeks to prepare for the intense workout. But this was a happy sore you are eager to elicit again.

What was just as exhilarating was meeting a fun group of women, movers, and shakers of sorts in the local community.

Imagine that: It was a female bonding event around typically-male sports—what a refreshing idea.

I learned that I had it in me.

I learned that I could handle objects being thrown at me.

I learned that I could do certain sports without hurting my hands.

And, I learned that it was actually fun.

Let’s do it again!

When it comes to feeding infants, support is best [PODCAST] 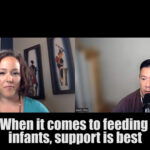