Months before, I shared with you that I developed suicidal ideation and was not sure I should continue residency. The forced sleeplessness and self-doubt were getting to me.

Did I deserve to be a surgical resident? I felt worthless.

I was so damn tired.

You knew I was afraid to leave the surgery and what that would mean for my military career — the career you stood by me to pursue when we were dating. Despite not wanting to join the military, you supported me because you loved to see how much I smiled when I talked about the Air Force. You supported me even when our paths diverged as a result. You just wanted me to be happy.

You supported me in pursuing surgery and knew how much school meant to me. We shared the same values. We spent our dates studying or working on lab work together, dedicated to our education and patients.

We balanced our extreme seriousness in school with extra goofiness on breaks. You often laughed at my jokes when I was laughing too hard to tell them in their entirety.

Our shared sense of humor filled my heart and lifted my spirits — so healing.

When I reflect on those times, it’s hard to conceptualize that the time we spent our lives together was relatively short because the impact has been profound. Your presence and absence have shaped the life I lead today, and I knew you were special from the first day we met.

I still laugh at the memories of the first day we met. I showed you around the house that your family would eventually buy — the one I was renting then. I told you what to expect from the first year in dental school, and I excitedly asked if you would like to see my kangaroo puppet that was designed to teach kids how to floss their teeth properly.

For a split second, I was embarrassed as I played back how that question sounded in my head, “Um. Hi. I think you’re cute. Want to see my kangaroo puppet?”

But you quickly put me at ease with your excited acceptance. You were eager to start dental school. And I think it broke the ice. You understood me. We understood each other.

Dental school was a personally challenging time for us both. I felt we were both misunderstood. Fortunately, you decided to transfer schools which I sensed was a better fit. When you transferred dental schools, we no longer spoke frequently. You met someone else, and I was happy for you. I valued our continued friendship and wanted you to be happy.

Though we no longer talked frequently, I felt your compassion and support when we did. You were generous with telling me that you were so proud of me. It meant the world. I needed those words, and your encouragement helped me to keep putting one foot in front of the other.

You knew me better than anyone. You understood me in ways no one else could.

That’s why when you called that night, August 10, 2016, it was unusual that I would not answer. It was the first time I looked at the phone, saw your name, and was too damn tired to pick up.

It was exactly 8:30 p.m. I know this because I still have the voicemail. While that sounds early, I was already in bed after many nights on call. I had taken melatonin to help me sleep because I was struggling to sleep despite being so damn tired.

Despite caring for you deeply, I looked at the phone and resisted answering while thinking: I care for you so much, and I need sleep. I promised myself I’d text you tomorrow.

I received a text back days later as I sat parked at a military base, waiting to enter a building to discuss what was happening with my military career. I was being considered for medical discharge after my suicidal ideation ignited an eating disorder to help me cope. The prospect of losing the military career I was so passionate about added fuel to the fire. I was not well.

I was so damn tired.

I immediately called, and your dad picked up. He told me what happened and the details of the funeral. I went into denial.

You lit up the world.

I was the one who checked out. I was the one slowly dying from starvation because I did not think I deserved to live. Why couldn’t it be me? Why you?

Looking at the clock, I had to pull it together to enter my military appointment, still numb. Still so damn tired.

Between the appointment and military discharge a year later, I made the decision to leave surgery after my SI did not abate. During that time, additional premature losses of incredible humans around me would leave me asking- why them?

For the next five years, I carried the guilt and shame in silence. The guilt of surviving. The guilt of not being present for the people I cared about who passed away while full of vigor for life.

Then slowly, over the past year, I leaned into the healing properties of writing, sharing, and community, sensing that I needed to make the most of why I was here, even if I didn’t quite understand.

As I write this, tomorrow is August 14, 2022, the six-year anniversary of Blake’s passing. To honor his life and to remind us all: That phone call you don’t answer today may turn into a text that cannot be answered tomorrow.

I am also writing this article after I asked a loved one living with cancer how I could best provide support. She said, “Just be here.”

Profound. For years, I have asked myself why I am still here and “here”… alive. Being genuinely present is all people need from us.

And lastly, I write this to remind us all to please sleep. My thoughts have always been darkest when sleep-deprived. How much in our lives could improve by simply not being — so damn tired?

Putting on the mask of professionalism causes burnout 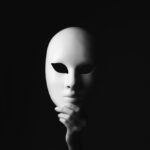