A tall, thin, down-glancing man slumped in a chair in the corner of the exam room.

His gray-haired wife sat primly next to him.

They were here with their adult wheelchair-bound daughter.

For the past two decades, the daughter had been under their constant care at home.

A chronic progressive illness had wreaked havoc on this young woman’s body.

Her adult life had been held prisoner by an insidious neurologic disorder.

She was having a problem that was felt to relate to her constant chair-sitting.

To examine her properly would require having the daughter arise from the wheelchair.

I glance at my nurse, quietly seeking silent advice on how to proceed.

Without a word, the tall man was soon at his daughter’s side.

In a business-like manner, he asked, “Do you want her on the exam table?”

“No, just standing up briefly will work,” I replied.

The man was in front of his daughter with a swift move of familiarity.

His lanky arms and the trim frame quickly brought her to a standing position.

I was struck by the effortless grace and strength of his movements.

He held her in position steadily from decades of such loving exercise.

During my physical exam, the man’s stance did not waver.

After I had concluded the exam, he gently lowered her back into the wheelchair.

The man returned quietly to his slumping chair.

My mind was racing with uncomfortable thoughts as I processed what had happened.

Could I have been as strong as this shy, selfless man?

I believe that a kernel of such strength does lie within me.

But, would that seed have flowered to its fullest as it had in this man?

That hope lies within me.

But that hope also has a ribbon of uncertainty curling gently around it.

Richard D. Sontheimer is a dermatologist. 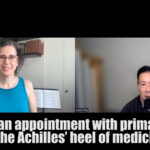 Just as medicine is rooted in relationships, so too is good advising