You always have a choice as to what to negotiate in a contract. You could redline the entire agreement, infuriating your future employer or potential partner in a joint venture, nitpicking things that don’t matter, or you can hone in on the areas that will really hurt you. In this article, we are going to discuss four things to focus on in a physician employment contract that will get you the most traction and save you headaches down the road.

1. Compensation – is it fair? You have worked hard, so you should always ask for a sign-on bonus and, if necessary, a relocation bonus. Often it just takes asking.

Then, take a look at compensation. Start with base pay. That gives you some breathing room to get settled in without feeling like you have to kill yourself on day one. Then, you have an established base in a year, and you can start bringing in a percentage of that revenue.

You should also be knowledgeable about the MGMA numbers for your specialty in the area where you work. If the 60 to 70 percent of MGMA in urology in Oklahoma, for example, is $250K per year, and they are offering you $200, you have a reason to push back. You’re not being greedy or a jerk, but you should always push for market value. It won’t come across as wrong if you have data to support it.

So let’s assume it’s production-based pay. Is it fair? Do you know what percentage split is common? You don’t want to push for getting 75 percent of the collections, leaving the group at a loss. Suppose you want to hang your own shingle. In that case, you get to keep it all, but if you are an employed provider, remember it takes a lot to run a medical practice, and they aren’t likely to give you a huge percentage of collected revenue if they are losing money. But don’t get run over either. Do your research about what’s standard.

2. Find a way out. Without fail, every contract should have a notice without cause provision. This means either party can walk away without any reason, as long as you give the proper notice. Ninety days is standard, so you have time to go to an interview, get hired, sign a new contract, and start the credentialing process.

This also reduces the emotion. You don’t have to get into detail about how they are all horrible people, don’t follow their own policies, and hired some idiot who screwed up the schedule. And if you are the employer, you don’t have to say, “You’re a bully and making our practice look bad,” or argue breach of contract. You simply put in your notice, and you have an end in sight.

3. Narrow the non-competes. It’s really important to realize that non-competes vary from state to state. Some states don’t even allow them. Some states can be “reformed” if found to be too broad, and in other states, they cannot. You need to learn this before you sign your contract. If you live in a state that doesn’t allow for them, and your employer tries to squeeze one in, ask for it to be deleted.

So let’s assume your state allows a non-compete. What’s the range? Do you have any idea what’s reasonable? How many years are you bound to the non-compete? Do your homework, so you know what’s considered reasonable in your state.

Then, narrow this down as much as you can. Think of the non-compete as a circle that is drawn around the place you work.   See if you can wrap that circle around where you practice over 75 percent of the time. That’s a general rule. You don’t want to round at some remote clinic a few times a year, and then – boom – that’s part of the non-compete. The more specific about where that non-compete attaches, the better.

If you live in a state that allows for a buy-out provision, is that even something you can pay? If the customary buy-out is a year of your salary and you make $500K, lowering it to $300K won’t make any difference. You aren’t going to write that check either. In all my years of practicing health law, I have had exactly two doctors buy out their non-competes out of hundreds of clients.

Lastly, see if you can weave in some exceptions. Maybe the non-compete won’t apply to an outpatient position if you’re a hospitalist, or won’t apply to locums work, or teaching, or a VA job. Give yourself options.

4. Know your leverage. When you leave a job, you have very little leverage. A group has no incentive to narrow anything at that time. So use whatever leverage you have now before you sign the contra. That can work in your favor later.

Or, if you are stuck in a contract now, see what leverage you can create from nothing. If they want you to work longer because there is no other doctor to replace you, use that. Indicate that you may be able to stay, but ask that they let you out of the non-compete. Or make a good case that this new job has zero influence on the employer’s business.

Lastly, if you were going to raise good faith issues of compliance, billing, coding, or sexual harassment before you walk away anyway, consider raising those before you put in your notice so that you have some leverage to negotiate.

The most important lesson when negotiating contracts is picking your battles and coming at them with optimism and positivity. Yes, you can and should be excited about this new opportunity, but you need to receive what’s fair and reasonable in the market. Don’t be afraid to push back on things that matter, and be smart enough to let the smaller things go.

Open-angle glaucoma: To screen or not to screen? [PODCAST] 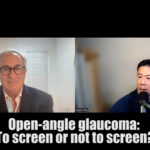 Allow yourself a moment to focus on yourself, not the next patient

Know your worth: Negotiating employment contracts from a place of strength
1 comments