I had a patient in the ED who reminded me a lot of my grandfather, my Dada. I grew up with my Dada, listening to his stories and learning from his knowledge of the intricate workings of the world. He was a first-generation college student, science lover, world traveler, vice president of a large chemical engineering company and loving husband, father and grandfather.

When I was in high school, he also became a patient, diagnosed with Parkinson’s disease with the onset of dementia. This patient had a diagnosis and age like my grandfather’s. They were so alone and disoriented — I kept on looking over through their glass door to check in. And I felt the same protective urge to ensure that people treated them fairly that I did for my grandfather.

As my grandfather’s illness progressed, so did the whispers about him in front of him.

Family, friends, and strangers alike could not reconcile his condition — it was a frequent reminder of his mortality, each of our mortalities. “He is not what he once used to be.” “Oh, so sad.” These blunt but well-intentioned statements made the loss of his independence due to Parkinson’s cut deeper.

I wish we could have shielded him from these irksome comments. And at times, my sister and I did try, physically shielding him, diverting the onlooker’s attention elsewhere.

It was only at Dada’s doctors’ appointments that I saw his demeanor relax. He was a quiet, strong man who did not complain and highly valued his independence. Parkinson’s stripped him of this, day by day. We were lucky to have wonderful physicians taking care of him.

Having just graduated from medical school, I can appreciate the task of how his physicians pharmacologically managed his Parkinson’s. Still, I do think that his physicians may have made a few missteps.

A lot of the way we are taught to think about medicine is very black and white. If someone over 70 is diagnosed with Parkinson’s, Carbidopa-Levodopa will be the drug of choice. It is what my grandfather was on.

Yet I experienced that there were more intricacies to it than that. He had unwanted side effects that considerably interrupted his quality of life. I often wonder what conversations could have been had during his doctors’ appointments regarding his goals of care. Were there different conversations being had with someone newly diagnosed with Parkinson’s at 50?

I was quite excited to start my third year of medical school, my introduction to the clinical world of medicine — to learn how I could become the type of physician my grandfather had had.

I met Mr. N as I was leaving the general internal medicine inpatient service. He was a lovely 91-year-old gentleman who, unfortunately, was admitted with a 10-liter oxygen requirement due to his COVID-19 infection.

Usually, he would have been sent to the ICU with an oxygen requirement of over 6 liters, but he had signed a DNR form, so his family and physicians decided to keep him on the floor.

In our workroom, the conversations surrounded our sorrow at his likely passing. I was beyond relieved to learn from his chart while on my next service that Mr. N was safely discharged home! We had not even entertained the chance of his recovery, had not pursued a transfer to the ICU and yet he was able to go home to his wife and family. He was 91, so we had decided for him that these were to be his last few hours. My grandfather was 80 at the time of his diagnosis.

The next rotation I had moved onto was pediatrics — a stark contrast from the patient demographics I had cared for during my time on internal medicine.

During my time on the inpatient pediatrics service, I met a 6-month-old infant, on the opposite end of life to Mr. N. This baby had come in with a heart-wrenching story.

Their father had physically abused the child to the brink of death — all measures were taken to resuscitate this baby. And now they were going to be in a vegetative state permanently. Everything had been done, and the outcome was gut-wrenchingly different from that of Mr. N’s. But why had everything been pursued for this baby when there was essentially nothing left to be done, whereas Mr. N’s recovery had been left to fate?

Mortality is definite, and our finiteness as individuals on this earth is frightening. But approaching our mortality with openness and honesty can help lead to a dignified end. I was in my junior year of undergrad, taking a class called “Death and Dying,” when my grandfather passed away after six years of his illness.

It will forever be one of my biggest losses — my mentor, my best friend, my Dada. I was always so uncomfortable at the thought of his passing, especially as he became frailer — at the slightest change in his health, I would panic. This class’s main assignment consisted of three reflections regarding our thoughts on mortality.

My first reflection was written four days before my grandfather’s death. I spoke of my fear of his passing, having written, “I could not imagine what my life would be like without Dada.” And unfortunately, I had to find out soon after that. However, I think being in this class during this time forced me to think about mortality rationally — I was able to celebrate his beautiful life rather than lament its loss.

If it is a conversation you are willing to have, I implore you to discuss the events surrounding the ends of our lives with your loved ones and patients. There was a day during his last year of life when my grandfather turned to me and said, “I will probably die soon.” But I shied away from the topic and brushed it off. I told him to stay strong, and I regret my response every day. My sweet, wonderful Dada was ready to have that conversation, and I wish I had been too. 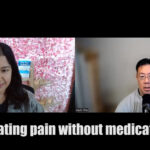