From an early age, I shared the soccer field with my younger brother, and later, we shared an orthopedic surgeon when I tore my ACL. I worked hard and excelled at my public STEM high school in New York City. I was also an athletic trainer in high school and college. I fit the classic stereotype of the injured sporty kid going into orthopedic surgery, right?

Only 6.5 percent of board-certified orthopedic surgeons in the United States are women, according to the American Academy of Orthopaedic Surgeons, the lowest representation of women in any medical specialty. While surgery in general is trending towards more female representation, orthopedic surgery has been lagging. It has been so slow to change that I still get letters of recommendation for medical students vying for orthopedic residencies addressed, “Dear Sirs.”

Dear Sirs, I am a woman orthopedic surgeon. Why is that so hard to imagine?

Breaking into orthopedic surgery is extremely competitive. There were 1,470 applicants for 875 orthopedic residency positions across the country, according to 2022 data from the National Residency Match Program, leaving 40 percent of training applicants without an orthopedic position. The path to orthopedic surgery is uphill for most, often lit by physician parents, many of whom are orthopedic surgeon fathers and grandfathers. The journey is frequently guided by close mentors and advocates, steering an applicant through medical school, internships, research opportunities, finding an orthopedic surgeon to shadow, and the grueling interview process — all of which help a candidate get selected into an orthopedics residency program. But in a field where so few surgeons are women, finding those mentors and role models can make the journey even harder.

I grew up in South Brooklyn in a middle-class family; no one in my family was (or is today) a physician. I didn’t have a true mentor until my pediatric fellowship training at NewYork-Presbyterian in 2014. That’s when I started to understand the type of opportunities that I wasn’t afforded during so many years of training. After that year of immersion with faculty who I still call mentors, I grew into a mentor myself. I vowed to connect with others who would not statistically fit the orthopedic mold: women and underrepresented minorities.

I joined the mentoring committee of the Ruth Jackson Orthopaedic Society (RJOS), the national society for women in orthopedic surgery, and soon became the committee’s chair, matching hundreds of women wanting to pursue orthopedics to veteran surgeons. I created a focused program at RJOS for women attending physicians needing guidance navigating their first year of practice, and I mentor medical students at my alma mater, the State University of New York at Downstate.

These students are often men, and many are minorities, who make up only a small percentage of orthopedic surgeons. Not only is orthopedic surgery the most male-dominated medical specialty, it is also the least racially diverse. According to the American Academy of Orthopaedic Surgeons, less than 2 percent of those practicing in the field are Black, and just 2.2 percent are Hispanic.

I became an attending physician in the Department of Orthopedic Surgery at NewYork-Presbyterian/Columbia University Irving Medical Center in 2016, in what would be the start of an upturn for women in our department. Under the leadership of Dr. William Levine, in his eight years as chair, the department has grown from one female faculty member to 14 — with four of us promoted to leadership positions. Today, one-third of the department’s orthopedic surgeons and resident trainees are women. Change can happen.

This success would not have happened without the deliberate focus of departmental and hospital leadership. Additionally, we have a tremendous role model in Dr. Laura Forese, Executive Vice President and Chief Operating Officer of NewYork-Presbyterian, who, like me, is a pediatric orthopedic surgeon. As one of the first women accepted as a resident into our orthopedic residency program and its first woman to have a child during training (when there was no formal maternity leave), she helped pave the way for us. More recently, Dr. Forese instituted a paid parental leave program for employees across the hospital system that decidedly included residents. She is a champion of women leaders in medicine locally and nationally.

Our representation matters not just for us but for our patients. Many of my patients tell me they came to me specifically because I’m a woman. I see many cases of scoliosis during the sensitive teenage years when some girls often feel more comfortable seeing a woman doctor.

Pediatric orthopedics is all about growth — normal, abnormal, slow, fast. Technically, growth is change under pressure. Growth only happens with change, with discomfort, with the acknowledgment of the uncomfortable. Growth continues when one is willing to speak up and stand for something.

In orthopedics, there is still tremendous growth potential. The representation of women and minorities in orthopedics needs to be expanded throughout both the NewYork-Presbyterian enterprise and nationally. There is hope — last year, 17 Black women matched into orthopedic surgery residencies across the country (there are less than 200 Black female orthopedic surgeons in the entire country).

This year, we interviewed more women than men for orthopedic surgery residency positions at NewYork-Presbyterian/Columbia, and 36 percent of the entire group identified themselves as “under-represented in medicine.” In a field where I fought to be included for so long, I envision a future with first-generation diverse orthopedic surgeons strongly represented at all hospitals across the country. Make sure you’re wearing shoes, because there will be glass scattered all over the floor.

A call to stop overworking [PODCAST] 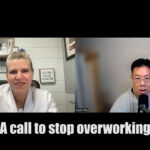 Direct care with a podiatry twist 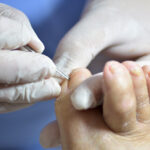 Dear sirs: I am a woman orthopedic surgeon
1 comments