We’re certainly not supposed to. Throughout our training, the consequences of illness are dire—if you have to miss a day, someone else, someone you know well and care about, will have to fill in. They will probably have to fill in on their one day off that week. You know they’ll be angry and sad. If you’re still a med student rather than a resident, the odds are lower that your role is essential, but it depends on the rotation, and you have the additional factor of clerkship grades. Clerkship grades determine what kind of residency you can match into, which determines the rest of your life. Your grade on a rotation is a combination of many nebulous factors, including whether your attendings liked you. Attendings don’t like a med student who gets sick.

But here’s the thing: Doctors are still people. People get sick. Everyone, sooner or later, gets sick. And the idea that doctors are somehow exempt from this is ridiculous on its face. Not only are doctors people, but doctors are also people who spend a lot of time working with sick people who have contagious illnesses. Not only are doctors working with people who have contagious illnesses, but many doctors, especially residents, are working brutal, horrific hours, with lots of sleep disruption for call shifts, which has been empirically demonstrated to impair immune function.

Doctors are going to get sick.

So what do doctors do when they get sick?

Mostly, they come to work anyway.

The reasons are many—the culture of stoicism, the penalties, even the idea that if you’re not present you can’t learn. It puts patients at risk, obviously. One would think that would be enough of a reason for doctors to stay home. But it isn’t. Thanks to a chronic doctor shortage (traceable in part to policies made by medical groups in the 1990s designed to throttle the supply of doctors to keep reimbursement rates high), there are never enough doctors to fill all the needs, which means that if I call in sick to my clinic, there is no one else who is going to show up and see my patients. Even if they could find a replacement for that day, it wouldn’t be someone who knows my patients. That’s a special relationship that can’t be substituted. Doctors tend to have an inflated idea of our importance, but at least for me, it’s true that I’d rather wait and reschedule to see my own doctor than see someone else.

And that’s just for clinic. For the hospital, the situation is far more dire. You can’t cancel on a ward full of inpatients. Someone has to care for them. So if not the person who’s assigned to it, and there’s never enough doctors, then who?

That’s how I ended up caring for laboring mothers in the pre-COVID era, wearing a mask. Even wearing a mask was seen as suspect—an admission of weakness. Despite the fact that it was by far one of the more effective interventions to prevent the moms and babies from catching my respiratory illness, there was pressure from my peers and my patients not to wear masks.

Patients are uncomfortable with the fact that doctors get sick. Patients will express shock and horror that doctors are expected to keep working while sick. When I mentioned on my (locked) Facebook account several years ago that I was caring for laboring mothers and newborns while ill with a respiratory virus, an old friend who’d recently gone through cancer treatment while pregnant asked where I was working. I never responded because I was afraid she would file a complaint with my institution and that it would rebound on me. I didn’t want retaliation for obeying my employers’ clear, if unspoken, expectations.

However, patients will also be surprised and even offended if I do take sick leave. The responses I’ve gotten from clinic patients when I take sick leave, as I have had to do, have been negative in this era of COVID. Patients treat it as though I must have taken sick leave for a frivolous reason. As though I couldn’t have been that sick.

And perhaps I wasn’t. I did work through a kidney stone once. I’ve had several, and one happened to hit while I was on an inpatient rotation during intern year. The pain is unmistakable—classic, colicky pain in my right flank, 8/10. I presented my patients at rounds with it. I sat and wrote my notes with it, gripping the edge of the desk with white knuckles during the spasms, typing frantically between them. I passed the stone, finally, around 3 p.m. I had worked through the whole thing.

So I can work through pain and illness. And if I can, shouldn’t I? Isn’t that the point of a medical career—to deny our own bodily frailties so that we can be seamless, well-oiled machines?

It shouldn’t be. Doctors are people. Doctors get sick. It’s not a matter of morality. I don’t get sick because I’m weak or bad; I get sick because I’m a person. It’s not inherently better to work through illness than to rest. If we view our life solely in terms of utility to others, we lose our humanity. Our field is struggling with a massive reckoning of how we see humanity, both ours and that of our patients. Just because we can do something doesn’t mean we should. Patients have been trained to see doctors as superhuman by decades of propaganda, still resonating from the cocaine-fueled productivity of Dr. Halsted. We need to reset those expectations and our own. We need to care for ourselves and each other when we are ill. It’s best for us, and it’s best for our patients. We need to increase the supply of physicians so that we are no longer in nonstop crisis mode.

We need to stop doing harm.

A story of a good death [PODCAST] 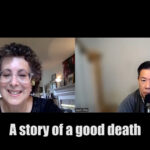 What do doctors do when they get sick?
1 comments