On June 1, two doctors, a medical receptionist, and a patient were gunned down in the doctors’ outpatient office in Tulsa, Oklahoma. An investigation revealed that one of the doctors was the intended target — a patient, angry because his pain was not relieved after spinal surgery, decided that the doctor who performed the surgery deserved to die. The other victims were collateral damage.

This event is shocking. It’s frightening that a place where people go for care and healing, a place where we should feel safe, became a place of danger and killing. But violence against health care workers is by no means a new phenomenon. In fact, health care workers have been the target of violence and abuse for many years. Up to 70 percent of nurses and doctors report verbal abuse by patients or families, and up to 45 percent of emergency room doctors report physical assaults.

While assaults are most common in emergency settings, where mental health and substance abuse issues are likely to be encountered acutely, the incidence of violence in a variety of medical settings has been rising steadily and has increased significantly since 2021. While most hospitals and health care systems have security guards and, in some buildings, metal detectors, the issue of violence against health care workers has not been addressed in any other comprehensive way.

The shooting in Tulsa last week was shocking but not that surprising. It is entirely predictable that unaddressed systemic problems will worsen over time, particularly in an environment of fractured hope, political unrest, disparities, and easy gun access — i.e., the current environment of the United States.

Sadly, many health care workers- doctors, nurses, technicians, and others view being the victim of physical and/or verbal assault as “just part of the job.” There are a variety of reasons for this.

First, when we encounter patients unable to behave appropriately because of intoxication, delirium, or psychosis, we don’t want to punish them or worsen their situation. We do the best we can to help those patients while keeping everyone safe. Preserving safety and dignity in these situations is, truly, part of our job. The trick is having the tools to do that job: training in de-escalation, access to safety equipment, other people to help restrain a physically violent person … and immediate access to care and counseling for the involved health care workers to mitigate physical and emotional trauma. The unfortunate truth is that we rarely have all these tools.

Many episodes of violence and abuse are perpetrated by patients and families who are physiologically able to control themselves but are very stressed. They are angry at long wait times, insurance issues and burdensome administrative procedures. They are scared and in pain. They feel dehumanized by the medical system and powerless to get their needs met. Lashing out may seem like the only way to cope.

At our best, health care workers have empathy for this. But we are also human. And frankly, we are not at our best these days. Even if we have empathy to understanding, we often don’t have the bandwidth to handle abuse with alacrity. Sometimes, even the best management can’t stop the escalation. Either way, it exhausts us further to manage abuse while trying to do our jobs.

Besides, having empathy for someone’s plight doesn’t mean we should tolerate hate thrown our way. Does dealing with aggressive patients need to be part of our jobs? Or should there be a “no tolerance” policy for abuse in medical settings, like schools have for drugs? Should abusive patients and families be thrown out of these settings? By law, we must give life or health-saving treatment, regardless of patient attitude, but could we disallow future visits?

I came to feel that violence and abuse are part of the job because my training program and institutions early in my career gave me that message. As a resident, I was berated, verbally harassed and threatened, bitten by an intoxicated ER patient, hit by another — but so were all the other residents. Later, as an attending working for a health care system, I wasn’t allowed to dismiss patients from my practice for verbal abuse until it became a persistent problem. The message was clear: my safety and sanity were less important than “customer satisfaction.” I was never offered education regarding the management of abusive patients.

By necessity, I learned these skills on my own. When a psychotic patient placed himself between me and the door and threatened to detonate a bomb, I asked him what he needed. He’d been given a prescription for penicillin by another doctor, but it was written in medicalese, which the patient believed was secret code. I rewrote it in English, and he left (he had no bomb). When a patient wielded a knife at me and my resident in medical clinic, I talked him down. He was angry at his landlord and confused about who we were. He agreed to an emergency psychiatric evaluation. When an intoxicated patient smeared feces on the walls of my waiting room, I locked my staff and myself in an office and called 911 (I know my limits).

I consider myself lucky — I’ve walked away from scary episodes physically unscathed. Still, each one is exhausting. They make me question my decision to continue working in medicine. I am wary at work. We have panic buttons and security guards, but we can’t be prepared for everything.

We must acknowledge that abuse of health care workers is one of many factors leading to burnout. Already, burnout is responsible for one out of five doctors planning to leave the profession in the next two years.

I wish health care had taken a harder stance on aggressive behavior long ago. I wish we didn’t see it as “part of the job.” As a profession, we need to say it will not be tolerated. We also need to teach de-escalation techniques and provide debriefing to affected employees. I fear that we will lose more doctors and nurses to burnout and, tragically, to death from violence. We can’t afford that loss.

Why doctors are getting their asses kicked by technology

Why the baby formula shortage happened 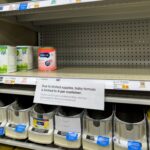