The silence felt heavy on the other end of the phone line. I waited a few seconds, and it dawned on me: He wasn’t ready. This moment, each in our own worlds was a defining point in our journey.

Twenty seconds earlier, I had just shared the following with him, “We are ready for hospice.” But he clearly wasn’t. Or maybe he was and just couldn’t verbalize it. He paused after I uttered the phrase. He went inward. I could tell he did from his deep breath. He tasted defeat as he swallowed and failure as he exhaled. He tried so hard to push them away.

His first memories of my mom came flashing through his mind. Just a year and a half prior, she walked into his exam room. Her hair was done, Chanel N°5 left its trace, and her French accent intrigued him. He found her enchanting, stylish without trying, so full of life. She knew so much about so many things. He would continue to learn from her in more ways than he wanted.

She was going to respond to treatment, he thought to himself. He was going to follow her for years to come. He would monitor her cancer-free days with annual MRIs. She was going to be a clinical trial success story. She would live to tell her grandsons as they become teenagers. But life would unfold differently.

He tried cutting-edge therapies, standard treatments, managed side effects, ordered imagining of every part of her body, and followed an aggressive tumor that found inconceivable ways to escape every trap he created. But he still had more tools in his kit, he told us. She could handle it, he thought. But for what purpose? A few more months of survival? Weeks? To meet an endpoint in a study?

He truly cared for her, wanted the best for her, and knew her stoic baby-boomer self could fight it. But her cancer cells changed the course and redefined plans. Her cancer evaded all scientific advancement. Her family bore witness to its unrelenting power. We watched the level at which it wreaked havoc and took control of her body. It was no longer about battles and power struggles. It was about upholding her inner worth, her gentle demeanor, and finding the courage to accept her true destiny. It was about dignity.

“You did everything you could have done,” I told him. Why did these words come out of my mouth? Why was I consoling my mom’s oncologist? Our therapeutic dyad swapped roles for a moment. I carried his pain and held him in his loss as he realized what truly was.

I wanted him to name it. I wanted him to bring up “death,” but he didn’t, so I did. I felt like I was dangling in mid-air, holding on to a post dug into the uneven ground of medicine that was failing us. I stayed there for a short while. I, instead, leaned into an end-of-life path I knew she deserved. I yearned for comfort to embrace her.

“I am not going to come between you and your decision. And I agree; it is the right decision,” he said. This statement gave me an inkling of support and trust. But he wasn’t quite accurate. It wasn’t my decision; it was ultimately my mom’s decision.

My mom and I had a brief yet critical conversation in the car on our way to chemo just weeks before her death which served as my compass. Talking about her death with her was the best thing I could have done. I normalized it by discussing my end-of-life wishes. It felt more digestible for someone who rarely spoke about what she wanted for herself.

When curing cancer and saving lives is your daily goal, I can see how these conversations are hard. We are all human, and we want the best for our patients. Many oncologists, palliative care doctors, and other physicians have an incredible capacity to hold this space. In this vulnerable space, we begin to experience our shared humanity, our hopes, our desires, and especially our fears. Allowing your patient, friend, or loved one to die isn’t giving up on them. It can be one of the greatest forms of healing that we know.

Art as a tool to manage pain [PODCAST] 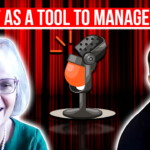 A difficult conversation with my mother’s oncologist
3 comments