Iconic singer Naomi Judd died at age 76, one day before she was to be inducted into the Country Music Hall of Fame. Her daughters, Wynonna and Ashley Judd, shared a statement confirming her death: “Today [April 30, 2022] we sisters experienced a tragedy. We lost our beautiful mother to the disease of mental illness.” An exact cause of death was not disclosed, and no additional information was forthcoming. However, the late Grammy-winning legend had been open about her mental health struggles and descent into debilitating depression and suicidal ideation. It was the focus of her 2016 autobiography River of Time.

Five years ago, I attempted to schedule a follow-up appointment with a neurosurgeon who had operated on my spine. I “clicked” on his name online, but I received an error message: “Page not found.” Subsequently, I discovered that my doctor had taken his life. I read his obituary on the Internet: “Dr. Eugene William Strickland (a pseudonym) passed away suddenly. He was 55 years old. He is survived by his loving family …” However, there was no mention of suicide or the circumstances surrounding Dr. Strickland’s death.

Why are we afraid to say the word “suicide?” Usually, it is for the benefit of the family, out of respect for their privacy. But the real reason is that mental disorders remain the most stigmatized of all illnesses, and suicide encapsulates mental aberrations to the extreme. I never considered my specialty (psychiatry) to have a mortality rate until one of my supervisors reminded me that our patients die by suicide and sometimes kill others by homicide, acts which can be prevented more often than not.

One of the first things I learned as a resident – and even prior to that as a medical student during my psychiatry clerkship – was that asking patients about suicidal ideation is an essential component of the mental status examination. I would have flunked my psychiatry boards had I not asked the question – “have you ever had thoughts of harming yourself” – to the patient I was assigned to interview. Yet, it is unfathomable that a myth persists that asking patients if they are suicidal will precipitate the action, despite abundant research that has shown asking about suicidal thoughts or attempts will not “put the idea” in someone’s head. On the contrary, acknowledging and talking about suicide may reduce, rather than increase, suicidal behavior.

The difficulty clinicians seem to have in initiating discussions about suicidal ideation has less to do with patient characteristics than it does with clinician anticipatory anxiety about learning that a patient is positive for suicidal ideation. Another one of my supervisors commented, “Art, the only thing worse than a suicidal patient is one who doesn’t show for their appointment.” It got me thinking that cherry-picking patients by avoiding those who are suicidal is not a bad idea. Then I realized it was not a sustainable strategy, nor is it even desirable if a psychiatrist really wants to learn his or her craft. It behooves clinicians to become comfortable asking “the question” and to become aware of interventions for the prevention of suicide in their practice.

Reading accounts of people who have died suddenly and mysteriously, without explanation, typically invokes suicide as a cause of death. The unwillingness to acknowledge a suicide reminds me of a bygone era when cancer was referred to as the “C” word, and the diagnosis was whispered and discussed in muted tones owing to its perceived incurability. Neither cancer nor suicide is incurable, however. Knowing the risk factors and recognizing the warning signs for suicide (and cancer) are common preventive measures. But suicide cannot be prevented unless we inquire about self-injurious thoughts and behaviors in our patients.

It is more correct nowadays to refer to individuals as having completed suicide rather than having committed suicide. What’s the difference? The former notation indicates that suicide is usually a contemplative event as opposed to an impulsive act. Most individuals who complete suicide have thought about it over a period of time, once again providing clinicians and others an opportunity to intervene. Warning signs – verbally or behaviorally – precede most suicides. Only when those signs are not recognized or well-hidden does it seem like the suicide was sudden or a shock.

Contrary to the theme song from MASH, suicide is not painless, but it does bring on many changes – to loved ones left behind. And what about the fate of patients under the care of approximately 400 physicians who die each year by suicide? How do they cope with the loss? Patients are rarely privy to the circumstances surrounding the suicide deaths of their physicians, which often leave them confused and unable to obtain closure, possibly making it difficult to move on with their treatment. Finding another physician I could easily entrust with my spine wasn’t easy for me. In fact, after consulting a half-dozen neurosurgeons, I still haven’t found one.

If you or someone you know is considering suicide, call the National Suicide Prevention Lifeline at 1-800-273-TALK (8255).

Robotics, automation, and the future of remote health care

What to do when your child suffers a concussion 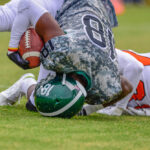 Why can’t we say the word, “suicide?”
1 comments