An excerpt from I Watch You Sleep: A Doctor’s Tales of Anesthesia and Chain Restaurants.

Medicine on television is often inaccurate. As a physician, it bugs me to see my field misrepresented. It is even rarer to see anesthesiology represented at all on TV. I’m sure lawyers scream at their screens during dramatic courtroom scenes, and I’m sure every other profession has things they nitpick when they see their trade being shown on the silver screen. One particular example of medical TV ridiculousness has always stuck with me, however.

One of my favorite movies with a tangentially anesthesia-related scene is 2004’s The Punisher with Thomas Jane. I don’t know why this film stuck with me all these years, since it was universally panned, but I’m thinking a big part of it is how handsome Thomas Jane is. A lesser reason is one scene in particular, in which the Punisher is about to torture some poor schlub to get some desired information out of him.

The Punisher stands out of sight behind his victim, who is naked and strung upside down, and describes to him the torture method he will use. A blowtorch, so scalding hot that it instantly sears the nerves, making it so the victim doesn’t feel any pain at first. And then, just the feeling of cold, as his body slips away into shock and unconsciousness. As the Punisher interrogates the victim in his prerequisite gruff Marvel hero voice, he clicks his metal blowtorch igniter, producing the characteristic fwoomp of a fire starting. When he doesn’t get the answers he wants, he pretends to hold the blowtorch to the victim’s back by first searing a piece of steak nearby to get a sizzle and the smell of burning meat, and then slathering his skin with an ice-cold popsicle. The victim yells out in surprise and perceived pain, begging him to stop as he gives up his secrets. The Punisher returns to the front of the victim and thanks him as he shoves the popsicle in his mouth.

I thought this was so comical and smart when I saw this scene as a teenager, even before knowing what I know as an anesthesiologist. The scientific basis of this scene is the spinal cord nerve pathways. There are numerous nerve tracts that carry different types of sensory information, including pressure, proprioception (the feeling of knowing where in space your body is), touch, pain, and temperature. Those last two—pain and temperature—actually travel together in the spinothalamic tract.

This comes into play on a daily basis for many anesthesiologists during Cesarean deliveries. Usually, we perform a spinal anesthetic, where we place a thin needle into the patient’s back to access the sac (he-he) the spinal cord is wrapped in and inject the space with a local anesthetic. This makes the patient numb for the duration of the surgery, allowing her to be awake for the birth of her baby. But while she won’t feel sensations of sharp or cutting pain, she will still feel pressure, pulling, and tugging, since those sensory fibers travel on a completely different pathway from the ones that transmit sharp pain.

How do we know if the spinal anesthetic is working before the surgeon cuts into an awake patient? Do we stab her belly with a scalpel, yelling, “Can you feel this?!” That’s a tad barbaric. In reality, many anesthesiologists channel their inner Punisher, using the knowledge Thomas Jane taught them about the intertwined nature of pain and temperature transmission to test their anesthetic. We can use an ice cube or a cold alcohol swab and swipe it over a part of the patient that is not anesthetized, such as the arm or the forehead, and ask her if she feels cold. That’s her baseline. Then, we swipe our cold object over different parts of the belly, asking if those sensations feel different than the ones on the forehead or arm. If the patient denies feeling cold, then we can safely assume she won’t feel sharp pain there either, since the two fiber types travel together. The best and most reliable answer from a patient is her asking if we started yet, indicating no feeling at all.

“Isn’t science fun?” Thomas Jane’s character asks his victim as he chokes him with a SpongeBob popsicle.

Zach Antonov is an anesthesiologist and author of I Watch You Sleep: A Doctor’s Tales of Anesthesia and Chain Restaurants.

Only patients can save U.S. health care [PODCAST] 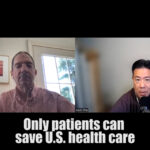 Why clinician buy-in is key to digital health transformation