“What does it mean to be neighbors in the trenches?” I began a recent staff meeting at our medical group.

We’d just read a passage about the Christmas Truce between the Germans and the British in World War I. The troops found themselves so close together they could smell each other’s food, hear each other’s music. It was impossible not to pause the violence in a moment filled with so much shared humanity.

I was trying to encourage the same kind of break from the tensions that arose after years of working closely together during the pandemic. Our edges had become sharp; tempers wore thin. People were getting burned out.

“Compassion fatigue” or “vicarious traumatization,” as defined by the American Institute of Stress, is defined as “the emotional residue or strain of exposure to working with those suffering from the consequences of traumatic events.”

People in health care, first-responders, soldiers, and journalists are among those most at risk. It leads to emotional, physical, and mental exhaustion; a reduced sense of personal accomplishment or meaning in work; a sense of isolation, a loss of morale, and a heightening of nervous system arousal.

But research shows this kind of overload arises not from too much compassion but rather, from an excess of empathy.

After years of practicing medicine and believing empathy lies at the core of all that is good, especially in health care, I was taken aback by the concept that one can empathize too much. But as biologists Singer and Klimecki and others have noted, the distinction between empathy and compassion exists in their roots.

The English word for empathy derives from the Greek word “empatheia.” The root of that word is pathos or feeling. The Greek prefix “em” means “in” or “to go into.” Compassion, on the other hand, comes from the Latin of “com” (with/together) and “pati” (to suffer).

Singer and Klimecki write: “In order to prevent an excessive sharing of suffering that may turn into distress, one may respond to the suffering of others with compassion. In contrast to empathy, compassion does not mean sharing with the suffering of the other: rather, it is characterized by feelings of warmth, concern, and care for the other, as well as a strong motivation to improve the other’s well-being.”

In other words, while one may become ineffective and consumed by grief when sitting in another’s shoes, bearing a slightly different stance of, say, caring cohabitation may be invigorating and lead to positive action.

I realize now that in my work as a palliative care physician, caring for the seriously ill, I had to develop the latter approach to avoid what I’d previously called “compassion fatigue” and now recognize as excessive enmeshment. In time, I was able to see that as much as I felt devastated for my patients, it was not me in that hospital bed or clinic chair, and if I took on those emotions, I had nothing to give back. I would fail as a carer. In other words, I had to become self-aware and learn to stay whole in the face of crushing grief.

But, back in the trenches, what did those soldiers likely feel in the moment when they made the decision to halt their fire, play football, sing carols, and barter for cigarettes together?

Was it empathy or compassion?

I would argue compassion. It makes sense that the impulse to play together, break bread and share a smoke arose as an almost sensory response to sharing the same air, wafting as it was with evidence of what makes us human.

At that moment, a fundamental prosocial response, a desire to promote and share a sense of well-being with others, overcame the hardening against the other side that may, in fact, represent a coping mechanism, or shield, against the pain of latent empathy.

A helping job, especially dealing with life and death, can feel like an endless battle. And it’s in the creation of this same kind of pause and safe space, filled with mutual recognition, and shared human concerns, that we find a way to move forward in peace to overcome our challenges.

Nurses are in need of racial healing [PODCAST] 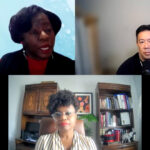