Every year, eager young pre-med students apply for medical school. When they don’t make it in and are quite determined, they apply to schools on a few Caribbean islands. They teach the same material, the same practical skills, the same tests are given and must be passed. Except these students arrive on an island far from home. Far from family and friends. Often, they must leave their spouses or children at home. The power goes out; the water turns brown. They wake up at 5 a.m. on a Saturday to go to the market with the rest of the local islanders to get their fresh food, because groceries are far between, are often aren’t open. The food is not guaranteed to be fresh or free of parasites. They endure constant changes in schedule, abrupt changes in school policy, abrupt changes in test days, tropical diseases. They endure professors who copy and paste questions directly from question banks far more advanced than the material they are expected to learn. They get test questions with spelling errors, grammar errors, or no question, and if they object, they are often threatened with their medical careers. Hundreds fail out the first semester. But still, they endure.

Then the medical students rotate in whatever hospitals in the U.S. will take them. These hospitals are often small. The call rooms in the darkest corners filled with cockroaches. Their late-night calls nourished with the chips and soda from a vending machine. The scrubs all torn. They practice more skills for hundreds of hours. They learn to draw blood, start IVs, transport patients. They learn to beg and plead with the staff to ensure the patient gets their surgery that day. They run around desperately searching for translator phones to get a proper patient history. They run to get food for patients who haven’t eaten. They do the jobs of the nurses who have gone on strike. If, for a moment, they falter or displease anyone, their career is threatened. They may stay on call for 72 hours straight to avoid the wrath of a higher power. It doesn’t matter, they say. It’s no big deal. I can do it. If ever they are sick, they are told to suck it up and stick it out. If they are in tears, they are told they are wrong.

They study hard and take the same strenuous 7-hour exams as U.S. students, which at times require traveling several states. They are judged the same. They pass. But how well? Often the same as U.S. students do. Sometimes better. But if they don’t, they work twice as hard. They have all the books. They arrive early each shift. If a superior is ever in a bad mood, they apologize feverishly. It doesn’t matter if it is their fault. Their evaluations and reputations are at the mercy of their fickle, jaded, overworked, undervalued supervisors. They are angry to be teaching these inferior students. These students are too soft. They will be toughened up good.

They survive all these, but they know their odds are quite slim. Because they compete with the U.S. grads. The ones that stayed close to home. The ones with power, clean water, family close by. The ones that often look upon them as inferior. They are not worthy. They are not knowledgeable. The nurses catch on to this. The nurse practitioners catch on to this. The residency directors tell them this must be true.

Then the newly minted Caribbean doctors, having made it this far, with thousands of hours more training and education than most nurse practitioners and physician assistants, more testing, more struggle, must spend between $5,000 and $10,000 on applications for any hope to get into a residency. That is exactly what they are told. They travel from state to state with the cleanest suits and the brightest smiles. The finest-tuned interview answers, and the greatest of hope. They have lost friends on this journey. They have lost family. They have lost love. They are exhausted, but they are eager still. They power between 5 and 25 interviews all over the country. It is expensive. They endure.

Match Day comes. Hundreds discover they did not match. They were not worthy. Some end their lives. Some give up hope. Some jump from one hospital to another, desperate for more experience. They pay thousands of dollars for more rotations or internships. More promises of matching if they just spend more money and prove that they are more devoted than anyone else. They put their lives on hold, or some get married and have children. But they carry on. The years tick by. They know their window is short. They become a scribe for $12 an hour, a research assistant for $13 an hour. An Uber driver. A garbage man. A McDonald’s employee while doing observerships in spare hours. They grow desperate. They feel as though their dreams are shattered. Their lives are over.

Some end their lives. Some declare bankruptcy. Their debts are hundreds of thousands of dollars. They scrape by. They wonder what all this was for as they watch NPs, PAs, and others gain more money and independence with less debt. What was this for? Why did I do this again? I forgot. But I must keep going. I have nothing else to fall back on. I have too much debt.

There is a patient. They are dying, slowly, in a rural town far from medical care. They are an inner-city grifter in an understaffed ER. They are wondering where the doctors are.

We are here. We have always been here. But we have been kept on the other side of that door, looking in.

What was it all for?

Happy Doctor’s Day. We wonder if we deserve to be doctors. Did we not want it enough? Were we not eager enough? Were we not obedient enough? Should we have said yes to that 72-hour call? Should we have said yes to that resident with promises of a good word, if we just spent that time alone with him in that dirty, musty call room, on that cold, wooden bed? If we had just signed that underhanded contract? If we had promised to be a resident without any pay?

What was this all for?

Patricia McGuire is a physician.

Am I a doctor or a contingency plan? [PODCAST] 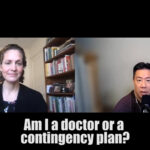 How much time do physicians spend in the EHR?

Happy Doctor’s Day. What was this all for?
2 comments