For most of my life, I was so busy cramming and training to focus on my nasal profile or my pesky protruding lower left canine. The drive to achieve academically consumed me from a very young age. I staved off self-doubt through study, intense repetition until the knowledge bled from my brain onto the pages of countless exams. For eleven years, I missed birthdays, family gatherings and sacrificed friendships and relationships. Yet, every door I jammed open led me to another until I finally felt I had arrived at my destination: pediatric otolaryngology fellow.

After I completed fellowship, my husband and I settled in Westchester. Now in my mid-thirties, I began to think again about correcting those imperfections of my youth. Yet, I could barely manage to schedule regular dental cleanings. It seemed like a strange time to slap on full-metal braces. Sometime later, when my friend showed up to synagogue with unobtrusive clear-plastic-barely-visible-aligners, I thought I had my answer. I envisioned starting my trays immediately in that timeframe dubbed “the future.” This fantastical period would begin when I was financially secure enough to address all non-essentials. First, there were goals to attain, babies to produce, and a practice to build. That all took time. So, I got to work … quickly.

Three healthy girls and thirty pediatric otolaryngologic patients OR nine operative cases a day later, I was feeling steady on track. Then, the unexpected happened. I got cancer, and not “the good kind.” Stage 3C locally metastatic breast cancer burst on the scene, knocking me down at the knees. In its wake, mild nasal obstruction and my crooked smile took a back seat to the only true necessity: survival.

Advanced breast cancer is war with so many step-wise battles to fight, surgeries, chemotherapies, radiation, and all its downstream reverberations (emotional, physical, psychological, etc.). And if this wasn’t enough, a month after my diagnosis, I began to feel this nagging discomfort in my upper molar. As I discovered, dentists don’t like to drill out and unleash bacteria in immunocompromised chemo patients. Those nasty buggers can get into the bloodstream and wreak havoc on the body causing overwhelming sepsis. We definitely did not want that, considering my chances at long-term disease-free survival were already dubious. Miraculously, I caught a break. The dull pain never intensified. The throbbing faded into the background of nausea, hair loss, and fatigue. Anyway, it seemed like a colossal waste of time and money to fix teeth in the mouth of a woman who may not be around to chew for very long, even if that woman was me.

Pushing out those thoughts, I needed a giant multi-step project to propel me through the fog into a place of optimism. It was the first time I had halted working as a doctor since my first general surgery internship. I was petrified of losing my purpose in life. Who was I, if not an ENT surgeon? Yes, I was a wife and mother, a daughter, sister, and friend. But, what would get me out of bed in the morning? Where would I go if not to the office or to the hospital? How would I define myself? I was scared and spinning.

Nonetheless, I felt too emotionally and physically weak to be Dr. Lando. So, I threw myself into the most daunting and simultaneously distracting challenge I could find: Building a house, from scratch. During chemo infusions, I laid out large paper blueprints. In between oncologic visits, I worked on a new site plan. Instead of treatment side-effects, I researched modular construction and pre-cast concrete foundation choices. I chose fixtures and faucets, bathroom tiles, and wall colors. I made a thousand deliberate tiny decisions to substitute the big ones that were chosen for me. Through false starts and layers of local bureaucracy, we began to dig. After all, a home could provide for all of them, even if I was gone. Its benefits did not depend on my existence, which was ideal, although it would be close to impossible to pay the mortgage on just one salary.

Despite the odds, after the last high-energy X-rays were aimed at my chest wall, the sun finally began to shine on me at the start of the Spring. At that same time, my rising trajectory was eclipsed by a great falling comet. Tragically together in our cancer fight for over a year, I lost my wonderful, brilliant father to glioblastoma. I was eviscerated without my lifelong hero and confidant. I felt utterly lost. But, I was still here with my husband and three beautiful girls beside me. My dream house with charcoal grey shaker shingles was finally complete. I had a bright career to plunge myself back into. So, in the shadow of deep pain and rays of new hope, we moved in that August and began to settle.

While still recovering and undergoing radiation in the early mornings, I had resumed work full-time. Staying energized was a daily struggle, but I loved my work. Ever so slowly, as the immediacy of the “red devil” (Adriamycin) and the intensity of paresthesia (numbness and tingling) from Taxol began to fade, I began to relax about daily living. I resumed believing that I could make short-term plans, actually seeing myself in the picture. It took a while, several years actually, to start considering longer-term plans. The answers of my oncologist always rattled in my mind,

“When do I stop worrying about recurrence? Three years? Five? Ten?”

“For you, the risk may never fully be over. But, we will continue to hope for the best and keep fighting. Just live your life … but don’t hold off on your bucket list.”

It could be that wasn’t exactly what she said back then. It may have just been my negative interpretation in those dark early days with the shock of my nodal widely metastatic pathology results still fresh on the page.

Eventually, some years began to pass, and I was still celebrating December birthdays here on this planet. Then, in mid-winter of 2019, COVID-19 hit like a cataclysm. The death toll rose precipitously as we all stared into the monstrous eyes of mortality. Physicians, nurses, and health care workers, in an attempt to care for others, became ill. We wore masks, tightly covering our noses and mouths, protecting us from contracting or contaminating. The anxiety of the pandemic, especially working in medicine, took its toll. I began waking up with these horrific headaches. Although my first thought, as always, was brain metastasis, these morning headaches seemed more constant than progressive. They were associated with neck pain and jaw soreness, more likely from constant clenching rather than brain swelling from the tumor. I made an appointment with my orthodontist friend, Dr. Julia Starobinets for an evaluation. She suspected that stress and all-night gnashing were collectively contributing to the problem. A possible solution: hard plastic trays that double as bite guards. However, my tooth-straightening journey would take over 1.5 years. That’s a pretty long-term commitment for an ex-cancer patient!

But here were the facts, I was six years out with no evidence of disease. My bite was increasingly worsening, and I had this rare opportunity to avoid detection while wearing a facial covering all day. Days later, in the hallway of the Maria Fareri Children’s Hospital, I bumped into my plastic surgery friend, Dr. Elizabeth Zellner. I mentioned my frustrating nasal airflow situation (escalated with mask-wearing) and long-standing nasal tip and dorsal hump concerns. I yanked down my mask and flashed an uneven smile.

“Let’s just book it Tali! What about next month?”

Could I possibly do both things? Say yes to both and Liz and Julia? Indulge myself and tempt fate to improve my breathing and bite, then surreptitiously recover under the concealment of my mask? Spend all that money on myself? Shouldn’t I just be grateful to be alive?

These are difficult questions to answer. Perhaps they are unanswerable, period. As a result of breast cancer and its unanticipated complications, I had undergone six surgeries: bilateral mastectomies and lymph node dissection with tissue expander placement, revision nipple-sacrificing excision, excision of non-healing skin prior to radiation, reconstruction, and fat graft, lysis of axillary adhesions and fat graft, fat graft. For a controlling surgeon, I had been anesthetized too many times due to circumstances not under my control. So, I made my choice. I took that leap. I scheduled my purely elective surgery. I lay down, closed my eyes, and drifted off to sleep with my new aligners tucked carefully in their case. This time, for the first time, it was on my own terms and with the tentative belief (while still fingers-crossed) that my decision was for the future of my long life ahead.

Tali Lando is a pediatric otolaryngologist.

From the ground up: an invitation for self-care for physicians and health care professionals

Why do physicians stay in toxic work environments? [PODCAST] 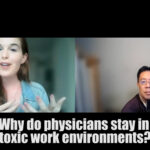