I don’t think I became a whole person until my mid-30s. When you spend the majority of your life in school, training, and building a practice, everything else goes on hold, or autopilot. There are very few things that I made conscious decisions about. Becoming a doctor was something I decided in childhood, and then it was a mission that I felt I needed to achieve. Every action in my life was to prepare me for the next step, to get into the right school, and have the right training. The problem with that is that no one teaches you how to be a human being in the midst of all that.

I was under the illusion that if you did the right things, worked hard, and were honest, good things would come to you. That’s not how health care works. In fact, you become labeled as the person who is easily taken advantage of. You become the go-to person to be dumped on. If you are honest, that is looked at as an easily exploited entity and a weakness.

I saw my identity and self-worth tied to my job. So, when I was being bullied, reported the bullying, and was fired a couple of days later by the bully, this was both shocking and alarming, as to how little progress we have made in health care. My story is common; this happens every day around the country. However, for some reason, I thought, at this moment, in a pandemic, with short staff, that I may survive reporting bullying.

My daughter was infected with COVID shortly after I was terminated, for doing the right things for my patients. The mask mandate at school ended, which, no shock that there was another wave of kids who were positive. Before I was fired, I was bullied if I needed to take time off, even for a personal doctor’s appointment. I was told I would be fired if I took time for an appointment. So, part of me was relieved I could be present with my daughter.

One morning at about 2 a.m., she came into my room struggling to breathe. Her accessory muscles were being used; she was tachypneic and short of breath. I thought we would need to bring her into the ER. I got into the shower with her for about an hour to see if steam would help, and it calmed down her breathing quickly. She stood in front of me in the shower. I watch her little feet next to mine. She always would put her feet right up to the souls of my feet. We had the same toes; she would tell me we matched. She reached her hands back and put them on my thigh to make sure I was there behind her. Her heart rate slowed, her respiratory rate slowed, and she started taking better breaths.

As a parent, it really makes me wonder what these other individuals tell themselves, that makes it OK to bully and harass people who are working as hard as they can. Despite seeing the most patients, winning the most awards, trying to fix things for other people, it was never enough, and I was never left alone. I thought, naively, if I kept doing all the things, that eventually I would be allowed to do my job. Sadly, that wasn’t the case. It’s far better to be a below-average man in medicine than a hard-working, award-winning woman. That’s a fact of culture. They will always be promoted and have instant credibility, while women aren’t heard.

How to close gaps in social determinants of health [PODCAST] 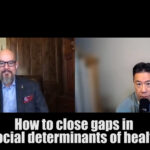 A physician was bullied and fired by the bully
3 comments