It starts with an invocation. A prayer. A plea for redemption. This is how the Sabbath Town Halls, Sufi Naqshbandi, and Bahá’í community gatherings begin and end.

Around the world, communities of faith are much more than a sanctuary. They provide a space for healing and hope. As religious exemptions, hesitation, and resistance for vaccinations and public health policies have taken on a new fervor, the critical role of faith-based institutions in supporting public health policies has become lost in the message.

Exemptions based on faith, a form of vaccine hesitancy, resistance, or refusal, have increased in number and appear to have taken an urgency that has risen the level of the U.S. Supreme Court. Currently, one in ten Americans refuse to get the COVID-19 vaccine because of their religious beliefs, undermining progress toward safety in the pandemic. The recent protests by the so-called “freedom” truckers’ convoy in Canada also involve faith-based resistance towards vaccinations and public health policies.

Yet worldwide, communities of faith also serve a central role in promoting vaccination among the previously hesitant. By allowing members to voice their concerns and address questions that strike deeply at values and belief systems, the dialogue within religious and spiritual communities is critical in the efforts to improve vaccine acceptance.

We observe how prayer gatherings, youth services, and diverse forums can promote critical dialogue about health-related decisions, public health safety, and vaccinations through our own work with three communities, distinct in culture and geography.

To quell fear of vaccinations amongst members, the Naqshbandi leadership promoted sadaqah, a voluntary means of charity in Islam, including feeding those who suffer from food insecurity. Sadaqah allowed members to surround themselves with “good energy,” protecting them from any perceived harmful side effects of the vaccine. By utilizing an existing protection practice the Naqshbandi were able to provide members with a tangible solution for their fears in order to increase vaccine acceptance.

Black church leaders used Facebook live streams and included headlines such as “The Role of the Gatekeepers.” The sessions would always open and end with a prayer, led by a Pastor. Physicians of color, some of whom were congregants, spoke about their own personal experiences with COVID-19 in the hospital, and dispelled myths about vaccines and infertility. This peer-to-peer intervention served as a powerful indication that this pandemic and vaccine effort were, indeed, far removed from a long history of medical racism.

The Local Spiritual Assembly of the Winnipeg Bahá’í community held regular prayer gatherings for people struggling from the social impacts of the pandemic. While addressing questions about vaccines and public health mandates, discussions led by Local Assembly members centered around the importance of the harmony of science and religion, and a notion of the “common good”—how personal medical choices about vaccinations could also involve what is best for the well-being of the entire community.

A majority of Americans, Canadians, and Pakistanis state that religion is an important part of their lives. For these individuals, religion is a way of life and their leaders are often a more trusted resource than doctors or public health institutions. These three communities are examples of a larger story about how faith-based communities can support public health policies, now more than ever, by catalyzing the internal dialogue with members.

Many religious leaders globally have also appealed for people to get vaccinated and support public health policies. In August 2021, Pope Francis urged Catholics to consider it as an “act of love” and a “simple yet profound way to care for one another, especially the most vulnerable.” Similarly, the Islamic Supreme Council of Canada, numerous Rabbis, among other Faith leaders the world over, have framed vaccinations as a spiritual imperative that benefits our interconnected communities worldwide.

Centering the conversation on fringe lawsuits and forms of resistance, such as the one presented to the Supreme Court or the “freedom convoy,” or offering statistics without understanding the stories may give the perception that religion is at odds with public health imperatives. But given the commitment of numerous religious groups to safeguard the health of their community and society as a whole, such examples may eventually prove otherwise.

Vaccination, like prayer, may in fact offer as much hope as redemption.

Maryam Chloé Pervaiz is a graduate student. Andrew Hatala is an anthropologist. Tara Vijayan is an infectious disease physician. Richard Handley is a physician-executive.

Support groups are life-changing for many patients

Why boundaries should be part of your 2022 physician goals [PODCAST] 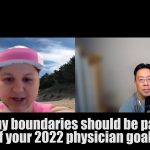