Someone once described war as: “Long periods of boredom punctuated by moments of sheer terror.”

Similar to flying: “Hours and hours of sheer boredom punctuated by moments of stark panic.”

My life is like that: Fairly mundane, routine and predictable — until it isn’t.

Near where I work is a sandwich shop. I have walked to it, but usually, under some time constraint, I drive. I have taken to getting a large sandwich, having half for lunch, and saving half for dinner.

There is a rather surprising amount of traffic in this particular area — a number of stores, a few eateries, side streets that are not all at right angles.

I try to park in the shade, but it’s often hard to come by, so I bring out my folding sunshade and place the silver side facing outward. And I place “The Club” on my steering wheel. I carry its key on my keyring, something I’ve done ever since my car was stolen near the end of 2017. One cannot be too careful.

I take my cell phone with the rear magnet off the dashboard, where I had placed it for temporary charging, retrieve my fanny pack from under the driver’s seat and exit the car.

There is usually a line for service. Sometimes it is long, but I try to be patient, gauging the amount of time I have before I should return to work.

In my job as a radiologist, I have been trained to look, but now I listen. Patrons and staff are invariably polite and nice to each other. Maybe a by-product of the pandemic from which we have yet to emerge.

But I have read about the converse, too.

Airline passengers who misbehave and act with aggression and belligerence toward airline employees. Ejections and fines are up.

The pandemic seems to have brought out the worst in some.

I get my sandwich — I try to keep life simple and vary between 2 choices: veggie patty and tuna. I always order the same wheat bread. Even though I’ve heard the tuna may not be real tuna, it tastes about the same and is probably a source of fish oil, so I am willing to give them the benefit of the doubt.

Four small ice-cream scoops. This place has sandwich preparation down to a science.

I make my selection.

“After cutting it, please wrap it separately.” They comply with a smile.

Do I have any 20s or smaller bills? Today, yes. Some days, no, in which case I use a credit card.

Then I take a seat to eat my sandwich. There are booth-type seats, worn with wear, and taller tables with chairs.

Today I take a tall table near the front.

I sling my black fanny pack over an adjacent chair and slide onto one. I’d wear the fanny pack, but it sometimes bothers my sciatica. I place my cellphone on the table and work on the sandwich. It’s nutritious, reasonably tasty, and hasn’t cost much.

When done, I pick up the trash and my phone and exit the door. I don’t look back. Perhaps I should have.

I unlock “The Club” and place my phone on the dash for charging. I remove the sunshade and head for work.

When I reach my workplace, I feel beneath the driver’s seat for my fanny pack. It isn’t there. In a flash, I remember where it was. Dangling from a chair next to where I sat for lunch.

Some things one can delay — This is not one of them.

Of course, I do not know.

The fanny pack may be where I left it or not. Someone with good intentions may have taken it. Or someone else.

When I re-enter the establishment I go to the table and look.

The fanny pack is not there.

My heart sinks. But it’s still above curb level.

A middle-aged woman comes up. Dressed all in black, she works there. “I’ve got it,” she said. “We knew you’d be back. Some thought you’d be back tomorrow, but I thought, if you’ve got all your stuff in there, it’d be sooner.” She went behind the counter and retrieved the pack.

I unzip it and go to offer her a bill. “No,” she motions. “It’s OK.” I thank her profusely. I want to give her a hug, but think better of it.

Instead I go to my car and ponder.

There was a tip jar near the cash register, and the lady couldn’t deny me leaving a tip.

So I went back in, did that, then drove back to work.

I thought: How inconvenient it would have been to have the fanny pack stolen. It contained my wallet with some money.

But it also had other things, the replacement of which would be inconvenient at best: my driver’s license, medical license, credit cards.

I thought: What was it worth to have my fanny pack retrieved by someone with benign intent? I did the afternoon work, then drove back to the sandwich shop.

The good lady wasn’t there, but some of her cohorts recognized me.

They welcomed me, as is their custom.

But I wasn’t there for a sandwich.

I just wanted to leave another tip.

Of course, I will try to be more careful next time.

But I have misplaced the fanny pack in the past.

Once I drove over two hours roundtrip to retrieve it.

I may or may not misplace it again in the future. As I age, I become more forgetful. It seems the natural order of things.

As Ronald Reagan, 40th president of the United States and an eternal optimist, once told it, when a youngster on a farm encountered a pile of manure, she said, “Well, at least there’s gotta be a pony around here somewhere.”

That day was my pony.

Permission to burn the manual

How not to be a broke doctor [PODCAST] 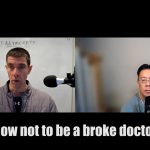 Finding joy in my forgetfulness
1 comments