My patient was trying to kill himself by refusing to treat a bladder infection. I looked down at him. His aura was black, indicating the premeditated murder of a human. Guess they hadn’t caught him for that one. His gang tats were Latin American, and his eyes were black. He didn’t like me much.

I wasn’t phased. He couldn’t do much about it, paralyzed from the neck down.

“It’s not going to work,” I told him. His lip sheened with fine perspiration, cheeks pink. He was healthy, mid-thirties, although his body was atrophying and softening with immobility.

This was his second try with this method. I admired his doggedness. I would do the same in his shoes — well, socks, I noted. Shoes weren’t going to be necessary for him ever again.

“You’re just going to have a fever and be miserable, and then get better anyway. You are too healthy. No judgment, but you might as well let me treat it.” He snapped something irremediably foul about my genitalia in Spanish. “Hablo español,” I said. “Yo se,” he said.

We looked at each other, grudging respect. I used to work in gang intervention in LA. This wasn’t California, but we understood each other perfectly nonetheless. Just because someone is paralyzed doesn’t mean they are nice. In the prison wing of our hospital, I hadn’t expected nice. Or reasonable. Now he seemed curious. I wasn’t the normal white girl-doctor. I wasn’t going to cut him any slack.

His chart said he’d been in the unit for eight months. In the general population, he would be prey for the other inmates, so he stayed in limbo at the hospital, but it wasn’t a quad ward. The nursing staff had no specialty training, and there was no rehab medicine. The TV bolted overhead was his only entertainment. Changing the channel wasn’t an option.

It was hell, I thought. This was literal hell on earth.

I returned the next day. A perfunctory exam, aside from the fever, his clinical status hadn’t changed in months.

“How long have you been in the bed?” I asked.

“What’s it to you? he demanded. He was irritable. The infection was exactly as I had predicted.

“If I had to lie here without moving, I would be suicidal too,” I said. He held my gaze. My honesty was unexpected.

“What would make you want to live?” I asked.

“I just want to go outside and feel the sun,” he muttered softly, unexpectedly. “Or listen to music. I used to like the radio.” Then grudgingly, “I’ll take the antibiotics.”

I doubted he had been that candid in years. In unsafe environments, you never disclose true desires. People just use them to hurt you. I knew that from childhood — I suspected he did too.

Exiting the guard station, I investigated. The prison allowed daily yard walks, and prisoners had a commissary. But these amenities weren’t at the hospital ward, and because he hadn’t been convicted, he couldn’t be transferred to the inmate quadriplegic ward.

The guard was a young Chicano man. Perky, intelligent, and active. “Don’t let him con you,” he warned. “That said, it’s a bad case, he’s here indefinitely, and it’s a miserable existence.”

I went to see the attending in the trauma bay — a young man from an urban center back East, New York, or perhaps Boston. The smartest surgeon on our team, he’d moved to Texas for the politics. He propped pointy cowboy boots on the desk. “Let him rot,” he said. “He killed a cop.”

“He allegedly killed a police dog when the SWAT team broke into his house unexpectedly. In return, they shot him eight times,” I said. “He hasn’t been convicted of any offense yet.”

“A police dog is still a cop and did more for society than that drug dealer,” he snapped. “You’re a bleeding-heart Californian, aren’t you?”

I didn’t tell him what people from Idaho said about dude-ranch cowboys wearing shiny boots. “It doesn’t matter where I’m from,” I said, “What matters is that this man is physically incarcerated by his injuries more than he could ever be legally imprisoned. We couldn’t strap a healthy man to a bed for eight months with no intellectual stimulation, even with a conviction. What gives us the right to do so by inaction?”

This was easier said than done. I spent precious hours of leisure time navigating the prison system, arguing for the human rights of an inmate who didn’t like me (or my genitalia) much. Months after the rotation had ended, I wrote impassioned letters about human-rights abuses, the need for people with quadriplegia to access art and nature therapy, and how if we can’t do it in Guantanamo, we shouldn’t be able to do it in Texas.

White girl I might be, but white girls are good at one thing, even if they are from Idaho: Writing bleeding-heart letters.

I saw the prisoner again before I left — the residency, medicine (it was a tough year). There was a cheap gray radio taped to the side of his bed. Tinny mariachi music wailed on the hot summer air. The TV was off, and his face was beatific. Other senses can be heightened in people with quadriplegia. He just nodded at me stone-faced. I couldn’t stop smiling.

“He goes outside once a week now.” The guard reported. “Honestly, we like it too. We don’t get much fresh air here either.” He hesitated, this slim man, a mirror of my patient if things, choices, had gone differently. “You know, you can’t judge anyone here … when you do this job.” He said carefully, with a direct gaze. “The doctors don’t always understand. But the inmates are all just humans. It doesn’t matter how they got here.”

Compassion can be surprising — who has it, who doesn’t.

Support desperate health care workers now, before your life counts on them

Thoughts from a doctor who runs late 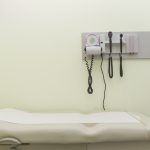