As I plug in the microphone and check the link, I imagine them on the mountain, kicking frozen boots into the night ice as the wind explodes over the ridge and rifles through the down of their parkas. I imagine the anemic glow of Jeff’s headlamp against the expanse of the Himalayas and Erik bending into the incline as he follows the nylon rope; he can hear the sharp tinker of ice crystals and the way the sound plunges into the void on either side.

I try to suppress a deluge of voices telling me they have made a mistake in interviewing me. Of how there are thousands of other doctors and writers who are more interesting and have more to say. But then, minutes later, they are there on the screen, Jeff Evans wearing a trucker’s baseball hat, leaning back in his chair, grinning an easy grin. Erik Weihenmayer is impossibly warm and genuine as he says, “It’s so good to hear your voice.” While Erik troubleshoots his audio, Jeff ribs him, and they joke with each other as only friends who have climbed mountains, glaciers, and sheer rock faces together can.

The time spent being interviewed on Jeff and Erik’s podcast, No Barriers, is surreal. And yet I worry that I’m overdoing it. That the extreme moments of my medical work take on such importance and focus that reality becomes distorted. I worry about the same thing with the book, that the chapters give a glimpse into the more joyful, harrowing, and impactful moments, but loose the bulk of mundane moments sitting in front of a computer, providing routine care, and sitting through hours of rounds.

That night I open a chapter from Jeff’s book, Climbing Through Storms. He tells of his medical volunteer work in the aftermath of the 2015 earthquake in Nepal. His words set the stage, and my imagination fills in the rest. A tent city of bright UNICEF orange and blue tarps flap in a thin, cold wind that funnels down the rock-strewn valley. Outside the medical triage tent, patients line up. Old men in patterned hats and sunburned faces, eyes clouded with cataracts; women clothed in a patchwork of brightly colored head scarfs, woolen sweaters, and long dresses; and dark-haired children, all patiently waiting under a thin sun. Every day the medical team starts at dawn and works until the sun dips below the high mountains. They sew lacerations, treat wounds, give anxiety medication, and fashion makeshift casts. It is stripped down, pure medicine. There is no electronic medical record, no billing sheets, and no prior authorizations. There are no lawyers waiting in the wings. There is only the intention to do good and dissipate suffering.

Jeff’s story takes me back twenty years to the dusty hills of Mexico. Each year in college, we ran medical and dental clinics from rural school rooms and churches for one week. It was a similar kind of medicine, lacking many modern conveniences, but rich in a multitude of moments—the heartfelt hug from a woman who hadn’t seen a doctor for decades, the gapped grin from a man who had a painfully abscessed tooth pulled, and kicking a soccer ball around a dirt lot with a crowd of children during the short breaks. At the end of the day, I would stand outside the one-room schoolhouse or church, exhausted, watching the sun cast its last light over the scrubby hill country.

The contrasts strike me hard. The mixture of the high from the interview coupled with the failings of the week. My mind contrasts the gratefulness of the Nepali people as the medical helicopter descended into their ravaged village and the thankfulness of the people I encountered in Mexico with three of the families in the neonatal intensive care unit who are angry, frustrated, and disillusioned with our care.

I wonder why? Is it the unimaginable stress families are going through, the politics of the pandemic, the stress of insurance coverage denials, communication breakdowns, the amount of time the medical team spends in front of computer screens plugging data into the health record and billing platforms, or the underlying belief that everything should be fixable?

I’m reminded of words from my book, When All Becomes New, “I wish I were waking up in a rondavel in the highlands of Africa with wisps of a smoldering fire melding into the morning mist, a cold stiffness in my bones, and a soft wind crescendoing through the grass. Let me see a baby with pneumonia, give a sticky pink elixir, approximate the edges of a laceration, give 75 milligrams of albendazole for a parasitic infection. Let me see one hundred patients. Let me be lost in the work, free of the electronic health record, free from the business of medicine and the commodity that I have become.”

As I turn out the light, I think about something Erik or Jeff wrote, that the time on the summit is short and fleeting; it’s what you do on the flanks of the mountain and after the summit that matters. It’s where meaning, growth, and significance come from. Erik and Jeff used the significance from the first ascent of Everest by a blind person to form a non-profit to help people tap into their inner hope, optimism, and resilience, to bring hope to wounded veterans, struggling youth, exhausted caregivers, and people with mental and physical disabilities.

As I lie in bed, with the glow of the porch light seeping through the cracked door, I think of how tomorrow I will try again –to labor on the flanks of the mountain and attempt to live into my ideals to notice, draw near, and bear witness. If only for a few moments.

Benjamin Rattray is a neonatologist. 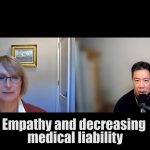 A booster shot of humility

More by Benjamin Rattray, DO, MBA

The physician and the podcast interview
1 comments