An excerpt from Rheum for Improvement: The Evolution of a Health-Care Advocate.

Their expert witness, “Dr. Z,” was simply a hired gun willing to do their bidding for a price. He had completed only one year of a rotating internship in family practice in the 1960s. He had not done a residency and had no rheumatology training. He had not seen a patient in 14 years and made his living providing “expert testimony.” Had this been an actual malpractice lawsuit, he would have been disqualified from testifying based on the Act 13 mandates in Pennsylvania that were passed in 2002. As noted in Chapter 3, this ruling decreed that any expert who testifies must have training in the same area as the defendant and must be in active practice or recently retired. Dr. Z met neither of these criteria. That did not stop the state board of medicine from using him against me.

Dr. Z’s review of my chart can only be described as stunning. I had to ask my attorney multiple times if he had actually given my entire chart to Dr. Z, as it was clear that Dr. Z had not read it carefully. He made a number of baseless attacks, such as noting the absence of a history or physical in the chart, when in fact, there was a complete history and physical in the chart. His 16-page report contained at least 25 errors of fact. It is one thing to criticize me on my choice of medications or my medical judgment; it is another to criticize me for not doing something that the chart clearly demonstrates that I did. As an example, he accused me of failing to document fibromyalgia tender points in my initial exam when this was clearly documented. He based his medical “opinions” on one superficial article on fibromyalgia. I am being generous when I say that his testimony was highly questionable in terms of its accuracy and its validity. Fraudulent would be a more appropriate word. Nonetheless, his errors and the argument that he was not qualified to testify based on Act 13 mandates fell on deaf ears. The state board noted that they were not required to follow Act 13. They simply did not care, as his testimony served their underlying agenda.

The trial was approaching in the summer of 2005 and I was a nervous wreck. My skills, competence, and most importantly, my integrity, were being impugned. I was outraged at Dr. Z’s written report. My entire future was at stake against an opponent who was not interested in fairness, justice, or the truth. My wife and I arranged for child care and we traveled to Harrisburg in July for the two-day trial.

At the trial, I finally met Dr. Z in person. He extended his hand to me and without thought, I shook it by default. I immediately regretted it. That single act of civility has haunted me since then. How could I possibly have accepted the hand of someone who was intentionally trying to destroy me without regard for the truth? I sacrificed my self-respect in that instant in the name of good manners. I have not been able to come to terms with that, even after all these years. It was truly a life-changing action for me. I was already 48 years old at the time, but I learned a lot about myself and grew up quite a bit that day. Courtesy and consideration are important but should not be rendered to those who engage in unethical behavior.

The trial then commenced. The hearing examiner allowed Dr. Z’s testimony, despite his lack of qualifications. During the trial, Dr. Z continued to make ridiculous assertions that demonstrated his lack of knowledge of the current practice of medicine and more specifically the practice of rheumatology. This was not surprising as he had no rheumatology training, but it was distressing nonetheless. His oral testimony continued to demonstrate that he had not read my chart thoroughly. He repeatedly drew conclusions criticizing my care, which were not substantiated by the facts of the case. He was on the witness stand for a day and a half. It was excruciating to listen to him with the thought that the hearing examiner might find his testimony credible.

My expert witness was board certified in pain management. After he refuted the nonsense spewed by Dr. Z, it was my turn to take the stand. I did so with great apprehension and was visibly shaking as I sat there. The prosecuting attorney grilled me, but I had an answer for every question she posed. My chart was well documented on every challenge that she raised. My testimony must have been very damaging to their case against me, as I was only on the stand for 20 minutes, compared to the day and a half that Dr. Z had testified.

Then it was over. I was numb. I waited nervously for a result and tried to resume normalcy.

I do not hesitate to share what I endured. I recognize that there is a code of silence that must be broken when one is involved in legal action. It is imperative that we speak out to patients, legislators, and other physicians against these types of injustices. The sense of isolation can be overwhelming. I do not want anyone to go through what I have gone through, questioning myself, my skills, and my self-worth. Hopefully sharing our stories will help to give other physicians added strength. I have come to firmly believe that publicity and sharing our experiences are our best tools against legal injustice.

Mark Lopatin is a rheumatologist and author of Rheum for Improvement: The Evolution of a Health-Care Advocate.

Lessons in caring too much from a fictional physician [PODCAST] 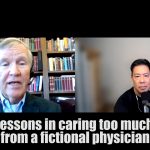