In September 2021, Hasan Minhaj appeared on The Tonight Show Starring Jimmy Fallon and touted a purported “a war … between MDs and DOs.” In it, he compared osteopathic physicians, DOs, to RC Cola as opposed to the Coca-Cola of MDs, claiming that DOs are “off-brand doctor[s]” (and notably placing MDs above DOs with a slight, almost imperceptible motion of his hand). The bit occurred while Minhaj recounted to Fallon an anecdote of how a childhood-friend-become-DO, who apparently failed out of medical school in the Caribbean multiple times before later becoming a DO because he “[couldn’t] even afford all the good letters,” performed a varicocele repair surgery on him after he and his wife had struggled for years with infertility issues. This surgery eventually led to the birth of their second child, the picture of whom Minhaj proudly showed the audience.

When I first heard the joke (I’m a DO), I’ll admit I was conflicted, but not necessarily for the most obvious reasons. Let me first say, I am a fan of Hasan Minhaj. I first came to appreciate his comedy when he spoke at the 2017 White House Correspondents Dinner. His impeccable delivery, gutsy takedowns of high-profile individuals including then-President Donald Trump, and overall edginess piqued my interest. Thereafter, I continued to follow Minhaj’s success throughout his many achievements over the years, including his first stand-up special, Homecoming King, filmed at his alma mater, University of California, Davis, and six seasons of his Netflix show Patriot Act with Hasan Minhaj.

So, you can imagine my unease when he delivered a joke seemingly at my profession’s expense. I could appreciate the crux of the punchline; DOs have historically been representatives of the much-lesser-known medical profession in the U.S., and there is a common misconception that DOs are inferior to MDs due to their, on average, lower scores on standardized tests compared to their MD counterparts. But we all know that timing is everything in comedy, and this joke just didn’t hit at the right moment.

Yes, though medical school admissions overall are becoming more and more competitive each year, mean admission GPA and MCAT scores of DO schools continue to lag behind those of MD schools. However, there are so many other more notable things happening right now in the osteopathic medical profession to recognize.

Earlier this year (2021), nearly 7,500 osteopathic physicians graduated, totaling the number of DOs in the U.S. to almost 135,000. In addition, more than 26 percent of current U.S. medical students are actually DO students. And even today, over half of osteopathic physicians practice in primary care, an area sorely in need of help across our nation. As far as standardized tests, in 2019, 4,837 DO students (60 percent of the class of 2021) sat for the USMLE Step 1, and 96 percent of them passed (the same percentage as U.S./Canadian MD test-takers, by the way).

In 2020, the Accreditation Council for Graduate Medical Education (ACGME), the American Osteopathic Association (AOA), and the American Association of Colleges of Osteopathic Medicine (AACOM) officially concluded a long-awaited transition to a single graduate medical education accreditation system, something that has been in the works since I graduated from medical school in 2014. What this means is that formerly osteopathic (historically only open to DO applicants) and allopathic (or ACGME, which were always open to all applicants) residency programs fall within the umbrella of the ACGME. Hence, all MDs and DOs in residency in the U.S. are now under one, unified residency accreditation system governing standards across the board for their postgraduate training.

So instead of creating division where there shouldn’t be, let’s focus on the good that the DO profession brings to our community. And perhaps even more importantly, let’s recognize the great work that all those in health care are doing. In this global pandemic, our health care delivery system is at the brink of collapse. Health care workers including physicians, nurses, and allied health professionals, among others, are exhausted. We need all the support we can get. Minhaj should understand this; after all, his wife is a doctor of public health (DrPH).

Since his original appearance on The Tonight Show, but not before receiving some pretty heated pushback from the osteopathic medical community, Hasan Minhaj has walked back some of his comments, He likened them to “throw-away jokes about people’s grad school test scores.” Minhaj also acknowledged that “we are living through a pandemic” and conceded that he meant to bring people together through his comedy, not to divide them. He ended his response by giving a “shout out to the DOs.”

So why is this important? A comedian makes an off-color joke about DOs a few months ago — one that is probably based on some truth – and apologizes. Can’t we just laugh and move on?

As someone who has previously championed DO distinctiveness and continue to apply osteopathic principles and manipulative medicine in my daily practice, one in which I precept MD and DO residents and serve as teaching faculty for students from multiple MD and DO schools, I will continue to advocate for the DO profession in any way that I can. And if that means calling out a favorite comedian, then so be it. Thus, the reason for this post.

All in all, I honestly don’t consider Hasan Minhaj’s joke to be unfunny, but instead of reopening old wounds and creating unnecessary division (or a “war” for that matter) where there is none, let’s celebrate all fully licensed, residency-trained physicians for what they are: just that. 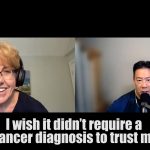 More by Patrick Wu, DO

Hasan Minhaj’s joke at the expense of DOs
1 comments