Private Ira Stein has so many wounds, has lost so much blood, that the corpsmen nearly bring him straight to Graves. Steve Benson can’t get a pressure. He shakes his head. “Matthew, there’s no point taking this kid to the OR. He’s too far gone. He has no chance.”

“Bullshit!” Barrett rams the cart through the door to the OR. “He’s eighteen years old! We aren’t going to just let him die. Let’s go! Let’s go!”

Benson and Kate look at each another and shrug.

Ninety minutes later, after a splenectomy, a hemicolectomy, an arterial repair, eight units of blood, and three units of FFP, the boy’s pressure is still zero. Matthew lifts his hands from the wound. “That’s enough,” he says and walks out the door.

Therese finds him half an hour later, sitting alone on a bench behind the officers’ club, still in his blood-soaked surgical gown, his mask dangling from his neck. His back is toward her. She walks up to him and puts a hand on his shoulder.

“What’s wrong with me?” he asks without turning around. “I saw failures as a resident. I wasn’t some Pollyanna who thought doctors cured every patient every time. But this …”

He lifts his tear-streaked face to her.

All the faceless young men who are brought to his operating table, prepped and draped, broken and bleeding, are finding their experience of war bears little resemblance to their reveries of war. They should have known better. At corner taverns in Chicago, Albuquerque, and Murphysboro, there were tired veterans with scars and limps; men with faded names of regiments or slogans like “Semper Fi” tattooed on their biceps; men with creased faces and shuttered eyes, who quietly nursed schooners of beer while they watched the Sox or the Dodgers on the TV behind the bar; men who had been to places like Bastogne and Peleliu and the Chosin Reservoir. They, too, once had reveries. Carelessly fingering an old scar or slowly twisting a worn ring, they might have explained some things to these un-blooded young men, things forever indecipherable to those who have never worn the uniform, who have never lit the flame. But words are weapons, slashing open memories, ripping open wounds, stirring the smoldering fires of pain that old warriors have doused with alcohol and denial for millennia. And while they spoke, these old veterans could not help but see distorted reflections of their own youthful faces on the bar’s polished surface and could not help but remember things they had tried so long to forget.

On Barrett’s operating table, nineteen-year-old boys achieve communion with the warriors of generations gone by. They grasp hands and clap shoulders. A fraternity of the maimed. They know now, these shattered young men, and the knowledge hemorrhages from them, drips down the side of the table, pools on the floor. The knowledge leaps from their shattered limbs, oozes from their sightless eyes. They, too, have learned there is no preparation for war, no defense against it, no vocabulary for it, and ultimately, no survival from it.

Instead of focusing on your time, focus on your energy [PODCAST] 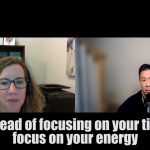 My patient and I were born on the same day. It took a tragedy to bring us back together.