It was a hot afternoon, but no dog day humidity yet. I was driving back from a satellite office when our nurse practitioner called. A patient with a condition we’d seen many times before, a brain hemorrhage, her consciousness waning. The CT scan showed blood in the ventricles obstructing the flow of cerebrospinal fluid.

The pressure was building and our patient was dying. She needed an external ventricular drain to relieve the pressure.

When I arrived, the patient was still in the ER, so we hustled to get her to the ICU, where our equipment was.

We briefed the family quickly on what we wanted to do and they agreed. Drilling a hole in the skull at bedside is pretty standard practice, but still tends to draw an audience and that day was no different, with about half a dozen onlookers. When I passed the catheter, spinal fluid erupted out of the top. We were relieving a mortally elevated pressure. It was still pretty dire, but maybe we could claw her back from the precipice.

Later that night our patient woke up a bit, started following simple commands, a benchmark of being conscious, and we got a head CT to check our work. As I clicked to review the study in my kitchen, one data field took my breath away. I hadn’t noticed it earlier. My patient and I had the same birthday, the exact one: month, day, year.

Suddenly — selfishly, maybe — it all felt different. We were connected in time. The two of us and our mothers were doing the same thing one day more than 50 years ago. From there our paths diverged. Each of us for one moment held the boundlessness of human potential as the nurses dried us off, got us breathing, and weighed us.

But before my patient even left the delivery room, the scrim of society began to define her by gender, zip code, the presence of additional melanin — a molecule smaller than table sugar — under her skin, and I was privileged by no such constraints. Maybe she had wanted to be a surgeon when she was a little girl, like I did when I was a little boy, watching Emergency! and M*A*S*H, but the external molding forces of society dissuaded her from this goal.

And maybe with better access to medical care, she wouldn’t have the chronic health problems that set her up for the brain hemorrhage that now led our paths to cross again.

The disparity was so obvious between the two of us. She was dying, and I’d stood at her head, healthy, with a little flaccid catheter, powerless to change the forces that diverged us from the day we were born, back to this palely lit ICU room.

I check every box for the patriarchy: caucasian, male, married and cisgender, Christian, in a position of authority, but 75 percent of our household is Latina. My wife emigrated from Brazil and we have two daughters. Our work team is comprised mostly of women also, as three-quarters of health care workers are. I can’t change my checkboxes, so maybe the best I can do is to try to make a world that will offer the same opportunities to my daughters that I had. In every patient, after all, fat is yellow, bone white, brain peach, bile blackish green.

When my kids were little, they asked why people looked so different. We showed them how dogs and cats come in different colors, shapes, sizes, and personalities. That was easy for them to see. Last year, during the protests following George Floyd’s murder, a friend recommended that we watch the Netflix documentary 13th. As we were watching a scene with firehoses in the 1950s, my fourth-grader said, “Wait, I thought the police were supposed to help people,” and that was a harder conversation.

We worked hard on our patient, but it wasn’t enough. She succumbed from a disease that was simply greater than the maximum effort we could bring to it.

But it’s easy to imagine how it would have been different, how our paths never would have crossed, if the world were a more equitable place. She lives in the memory of her family and friends, and in some strangers who received the organs that she donated. Her family knew her laughing and loving, as a mother, a daughter, a sister. I never knew or spoke with her, but I’ll remember her, too.

War is really not all it's cracked up to be 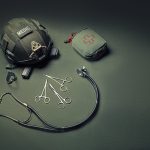