Doing side gigs is in vogue now. I want to tell you my story. It has to do with how one of the leading telemedicine companies ruined my career. I hope that my story will help many of you navigate this tough economy, especially those who are coming out of residency.

I started working as an independent contractor about ten years ago when it first came to the forefront. I worked with many telemedicine companies in this manner, and it was nice to have some side income. Most of the patients were pretty nice at the beginning. But, pretty rapidly, it turned into an antibiotic dispensary service, which is something that I didn’t quite care for. All of these companies emphasize customer satisfaction. Patients were now customers, another thing I did not care for. Then, physician scorecards were introduced to curtail any kind of complaints that customers demanded. This was quite different from any other care setting that I practiced in before; now, the patients told the physicians what to do.

During the height of the pandemic, I noticed that there was increased usage of these platforms, leading to many glitches on the website. I pointed these out to the staff, who completely ignored me. Then, much to my surprise, I received a letter from the company that stated that I would be put on a performance plan because I was using templated notes. Coincidentally, this notice arrived after the company started accepting insurance for payment. Before this, they had been mostly a cash-based service. The letter stated that if I did not do the performance plan, I would be reported to the National Practitioner Data Bank (NPDB). This was not a choice and rather was an ultimatum.  The rules of the performance plan were quite vague, and I asked for clarification about this. I was limited to only ten consults per day over a 30-day period. I was told to not use any templated notes. At the end of this, I performed over 200 patient encounters. I was notified that I failed the plan because I did not work 30 days back to back. Thinking this was not reasonable, I wrote to the company’s chief medical officer. He seemed unaware of any of this but quickly arranged a peer meeting which was supposed to be objective and review the whole process. Of course, it was anything but that. The report in the data bank remained in place.

Since I didn’t know much about the data bank, my research revealed quite a bit. It was created by now Senator Wyden, who is in the news currently for his proposed tax on billionaires. Back in the 1980s, he created this bill to prevent physicians who were practicing bad medicine from going from state to state without being caught. This data bank was created as part of the Health Care Quality Improvement Act as proposed by Senator Wyden, and it allowed any health care entity to report any physician. The language is all legalese, and terms for which one could be reported are broad and vague. The NPDB also allowed for a dispute resolution process, which sounded equitable, except it did not look into anything aside from the spelling of the physician’s name and other objective data such as date of birth and social security number. This was only to ensure that the physician’s identity being reported was correct. It did not look into the veracity of any complaints and was prohibited, as dictated by this bill, from questioning or investigating the entity reporting the physician. In addition to this, the only way to remove the report would be for the physician to go back to the reporting entity and ask them to remove it.

So, faced with these choices, I was essentially left stranded, not only by a multi-billion dollar telemedicine company that chose to report me for using templated notes and not working 30 days back to back but by my own government who created such a system that would not allow anyone, including myself to challenge the veracity of the report. As I looked into other physicians who had been reported, I discovered a deep dark chasm where physicians who had been reported essentially had no way to challenge the reports, and some of them even tried to take their case to court. Unfortunately, for many physicians, the courts do not uphold the side of the reported ones and stick to the law as enacted by the NPDB.

I want to write this to increase awareness on the part of physicians, many of whom are graduating from training or looking to make side income to help make ends meet and pay off their debts. Unfortunately, these side gigs come at a cost, many of which are not discussed or made known to all of us. This one side gig managed to entirely ruin my career. It damaged my professional reputation, suffered financial devastation, and has been having a hard time securing work. I am facing a choice as to whether I should leave medicine entirely. The NPDB is a system that has been weaponized against physicians, even those who are advocating for patients.

As if this wasn’t bad enough, I turned to position advocacy groups such as the American Medical Association and American College of Physicians. Both of these organizations said that there was absolutely nothing they could do. I also wrote to my local congressman and legislators, and none of them could do anything, aside from getting the same generic response I received from the data bank itself.

This pandemic has been very hard, but working with these side gigs has been a difficult experience. I fear that they are encouraging patients to demand inappropriate care only to assuage the company’s profit margin. This will come at the cost of providing good medical care to patients. On top of that, I came upon more physician forums that pointed out these technical issues, which I had reported to tell several years ago, are still occurring and with more frequency. So, the problem remains on the telemedicine company’s platform. In the meantime, I have an uncertain medical future.

Climate change through the lens of an emergency physician [PODCAST] 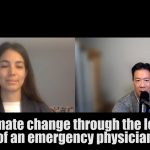