During my 30 years in medicine, and especially as I began leading medical missions in 2005 to the poorest countries in the world, I have seen much need, tragedy, and heartbreak. It is overwhelming. Despite our best efforts medically to help, we fail. What do you do when all else fails? What do you do when someone has lost all hope and feels you have nothing else to offer?

In his book, Unspeakable: Facing Up to the Challenge of Evil, noted author and speaker Os Guinness relates a powerfully moving story of incredible faith in the face of unimaginable horror. He tells of Baroness Caroline Cox, known as the “Mother Teresa of the war-torn poor.” She is to many of the world’s helpless, “love in action” in human form, and a powerful voice on behalf of the forgotten. Regardless of the color, creed, or race of the victims of war – those who have been maimed and raped, their families robbed, killed, or taken into slavery – she reaches out with food, clothes, and medicine. Often when she arrives, the people greet her with the words: “Thank God you’ve come. We thought the world had forgotten us”.

She was once asked to relate both her worst moments and her best during all her journeys of mercy. The worst? She thought for a moment, then described with brutal simplicity what it was like to enter a Dinka village after Sudanese government-backed soldiers had left:

The stench of death was overpowering. More than a hundred corpses lay where they had been savagely butchered. Men, women, children, even cattle, had been cut down or herded into captivity to be carried north as slaves. Straw huts were ablaze, crops had been razed, and devastation and death confronted the eyes everywhere. Worst of all was the knowledge that the militia would return with their gunships and Kalashnikov rifles, and the area’s villages would once again lie naked before the ferocity and bloodlust of their attackers from the North. Genocide is an overworked word and one I never use without meaning it. But I mean it.

And the best moment? It came right after the worst. With the raiders gone and the results of their cruelty all around, the few women still alive – husbands slain, children kidnapped into slavery, homes ruined, and they themselves brutally raped – were pulling themselves together. Their first instinctive act was to make tiny crosses out of sticks lying on the ground and to push them into the earth. What were they doing? Fashioning instant memorials to those they had lost? No, the crudely formed crossed sticks, pressed into the ground at the moment when their bodies reeled and their hearts bled, were acts of faith. They served a God who they believed knew pain as they knew pain. Blinded by pain and grief themselves, horribly aware that the world would neither know nor care about their plight, they still staked their lives on the conviction that there was One who knew and cared. They were not alone.

Hopefully, none of us will ever face such horror. But what each of you do face each day are patients and families who often are going through an illness or personal tragedy that, at the time, is truly overwhelming for them, just as devastating, just as heart-breaking, just as life-changing. And when faced with these patients and families, sometimes even our best efforts medically fail. Sometimes even our best attempts to give hope, to be “hope-givers,” are not enough. What do you do then? Medical training does not teach what to do when there is nothing left medically to do and all hope seems gone, at least I wasn’t. This is when, I believe, there is only one thing left to do – to give what I call “the warmth of love” that comes through loving touch, holding a hand, giving a hug, and more powerfully, shedding tears as you share their pain, hurt and hopelessness. Have you ever done this with someone? It is a frightening thing to be so transparent. This is especially true for those in health care who have learned to “compartmentalize” their emotions. I believe, and I have experienced this many times, that the true “art of medicine,” the human side of medicine, comes through brightest and most powerfully at just such moments when we allow ourselves to be “tears” for them. Are you willing to be “tears” for your patients and their families? If you are, you will find a renewed joy as you experience real medicine once again, and your patients will know that they are not alone. 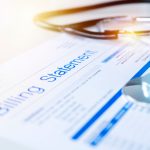 Listening to patients with our eyes [PODCAST] 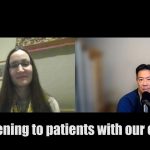