One of the most dramatic changes from my training to the present is the nearly complete disappearance of elective ulcer surgery. (Reminder: as I’ve said before, “elective” means non-emergent, as opposed to unnecessary.) The revolution began with the advent of drugs that effectively reduce gastric acid production and settled in for real when the relationship between ulcer formation and the bacterium known as H. pylori was worked out. I have to admit I lament the passing. Given time to plan it and give some thought to the available surgical choices, operating on the stomach for ulcer is technically interesting and therapeutically rewarding. Limiting the experience to emergencies, while setting the stage for drama, means narrowing the field to one of a certain untidiness.

I’ve always liked fresh corn and peas. Each brightly colored, with a crisp sweetness, and both best when cooked very gently. Sit those kernels on a plate, they make a nice visual statement as well. Slopped between loops of intestine, stuck above the liver, soiling the hidden spaces around the pancreas and duodenum, filling the pelvis, some of the sensual pleasure of what may have been a nice meal gets lost, and dealing with it puts me off the feed for a while. Doesn’t smell all that great, either. If it’s embarrassing to get a drop of soup on your tie, imagine how it’d feel to see your omentum harboring a whole salad. Hanging down from the transverse colon like a wet apron, it can hide lots of cranberries in its crannies; getting them loose requires individual plucking, and can take a while. The upside is that a person with a perforated ulcer is generally in a lot of pain, and sewing up the hole, cleaning out the food, and copiously irrigating away the acids means s/he is likely to wake up with a smile. I can put up with a little personal unpleasantness when it produces results like that.

Stab wounds don’t seem to happen on an empty stomach. Maybe it’s because victims of such things are not always entirely innocent. Drinking all night in a bar, washing down peanuts and chicken wings appears to be a necessary precursor to picking a fight, and losing it. Knife holes in the stomach are generally much larger than ulcer holes, and can empty prodigious amounts of stomach content into the abdominal cavity. The odor of alcohol and partially digested food in the belly is not much different from when it appears on a fraternity floor; sticks with you a while. But once again, a few well-placed sutures and some high-class janitorial work predictably results in a happy patient. The process can require an amazing amount of saline wash before the irrigating fluid looks clear enough to drink.

Of all the new words I learned in medical school, “bezoar” (pronounced BEE-zor) is among my favorites, just for the way it sounds. It means an aggregated lump of stuff that can clog the stomach, or the intestines, and can look quite impressive. They come in two main varieties: trichobezoars, meaning those containing hair, and phytobezoars, referring to those resulting from undigested vegetable matter. A feline furball is a trichobezoar, as is one occurring in a human who chews hair. Where I learned to be a surgeon, springtime often produced a victim or two of over-indulgence in a not-yet ripe local fruit: persimmon bezoar was on the list of possible diagnoses of abdominal pain. I’ve opened a few stomachs to extract bezoars, typically in pieces. The usual word sequence, spoken to the scrub nurse, goes something like “stay stitch … one more … cautery … suction … ring-forceps … eww gross …”

I must have dozed a bit during the lecture on bezoars in med school: Not at all unusual, I confess. Hearing vaguely through my daze about eating hair, furballs, undigested organic matter, tricho- and phytobezoars, for a while I thought I’d heard that a hair-ball was called a Fido-bezoar, as in the generic doggie, good ol’ Fido. When a classmate corrected me, I was less embarrassed than disappointed.

Leaving academic medicine was a matter of self-respect

Why storytelling is critical in medicine [PODCAST] 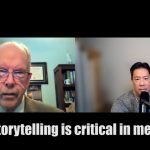