My older sister, Joy, will soon die from metastatic breast cancer.  She will pass away at age 50.  She will leave behind a husband of 21 years and the three children they nurtured to young adulthood.  Our elderly parents will lament the unnatural timing of their firstborn’s death.  And, I will mourn this loss, wondering whether my support of my sister’s spiritual beliefs makes me, as a physician-scientist, an accomplice in her death.

For the six years she battled cancer, Joy insisted God would heal her. Initially, she latched onto a popular mega-church pastor’s guidance to avoid talking about the problem.  She routinely deflected my inquiry of, “How are you feeling?'” with the quick rejoinder, “Great! How are you feeling?” Any mention on my part of cancer or treatment was the conversation’s death knell.  There was no opportunity for me to tap into my medical training or professional network.  I felt benched in the fourth quarter of a too-close-to-call game.  So, I forced myself to cheerfully walk on eggshells within narrow conversational confines.

While she did not completely shun allopathic medicine, my sister’s commitment to it vacillated.   From sparse stolen snippets, I gather she underwent chemotherapy and radiation.  A surgeon declined to operate.  There had been some type of flare from palliative radiation.     I vividly recall one phone conversation in which she announced her decision to stop treatment because “none of it works anyway” and her ardent belief she would be divinely, and imminently, healed.  I started crying and told her that I had to call her back later.

Even as her cancer spread, Joy remained committed to her spiritual beliefs.  She insisted to everyone who would listen that she would be healed.  She confided to me that she believed God was communicating with her through the physical environment.  She shared her cryptic dreams suggesting the day and time of healing. When she told me these things, I never once told her that I did not believe her.   Even though my heart sank and a profound sadness swept over me during these conversations, I mustered enough emotional strength to reassure her, “all things are possible with God.”

At one point, her spiritual visions guided her to contact pastors of our church’s denomination from across the United States and advocate for continued union with its LGBTQ+ faction.  She equated this activity as proof of faith for our God, who would then heal her.  Some pastors graciously engaged my sister; others callously dismissed her, including her own.  When she told me this, mama bear me fired off the following email to her home church leader:

Hello.  My name is Kasi.  My sister, Joy, attends your church.

She says you treated her poorly when you met with her.  She seemed genuinely surprised and hurt.

I told her that I wasn’t surprised at all. I reminded her Jesus faced the same — and worse — in His day.

Like the bright ray of sunshine that she is, my sister tells me she will pray for you. I will, too.   I pray you will learn, love, and be patient, and compassionate.   I pray that you gain the insight to apologize to her.

Sometimes I wonder whether I should be more vocal in my disagreement with my sister about her medical issues.  I wonder whether I should counter her adamant assertions with my own, something like, “God created doctors and treatments as his divine healing,” or “this sounds really crazy, Joy.” No doubt, I would join a long line of critics who are derisive of my sister’s beliefs.  This mockery, and the absence of physical healing, has left my sister feeling humiliated and depressed.  I choose connection with her over ostracizing facts.  This has been challenging to me because my medical work prioritizes the latter.

Occasionally, I ask myself the “why” question, and it sends me down a dark rabbit hole.  Why did Joy get sick?   Why won’t she let me help as a physician-sister?  Why doesn’t our God heal her?  Why won’t He let me take on her suffering?

Author Philip Yancey helps me out of the abyss.  He suggests we ask to what end, not why?  For me, this is supporting Joy on her terms and not mine.  It is stifling the urge to problem-solve and instead simply love and listen and laugh with her.  For me, it is living in, and being mindful of, our remaining moments.

So, in her final days, I continue to support my sister in her belief that she can be healed. Although, she now uses words like “hope.” She hopes she will get better.  I view hope as an invaluable gift.  It is, truly, as poet Emily Dickinson writes, the thing with feathers/that perches in the soul/and sings the tune without the words/and never stops at all.

Recently I visited Joy after her enrollment into hospice and subsequent hospitalization.  She was groggy from the PICC-delivered hydromorphone and slept away most of our visit.  I had the heart-breaking realization that my big sister was mostly already gone.  But, I repeatedly kissed her forehead, cheeks, and holy cross ring-adorned hand; helped steady her when she went to rise from her chair to her walker; fashioned her long gold-tinged tresses into a smart bun; read aloud to her; watched her favorite movies — August Rush and Hacksaw Ridge — and assisted my brother-in-law with house chores.

To what end?  It occurred to me that my sweet sister is in God’s embrace.  She rests peacefully in a quiet, sun-filled, home located off a dirt road on a large expanse of Colorado acreage with an attendant husband whose self-articulated clear purpose is her care.  Hospice angels hover near and ease her discomfort.  The overhead white tufts of clouds, and heaven, seem within the hand’s reach. And, perhaps, there are different forms of healing. 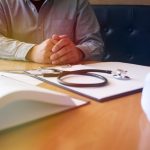 Do you have any idea how beautiful you are on the inside? 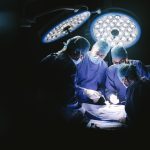 A physician and sister, but also an accomplice?
4 comments