A common communication problem: Although important questions often have complicated answers, sometimes we ask things in a way that shuts people down.  When someone poses a question that calls for “yes” or “no” as the expected answer, the person doing the asking often puts the other individual on the spot.  When this plays out in a professional setting where there is a presumed power differentiaL, the questioner may unintentionally be sowing the seeds of a dysfunctional relationship. A couple of examples:

Boss to employee: “Have you completed that time-sensitive project yet?”

The employee thinks to himself: Well, I haven’t, but it’s clear that she is feeling impatient and that she expects me to say “yes,” but that would be fibbing.  If I say “no,” I may not get that raise I’ve been angling for.  If I launch into an explanation, I may be viewed as indecisive.  This feels like a no-win situation.  Oh well, here goes, “I’m almost there, boss.” The boss moves on, and the employee is left wondering whether he handled this well or not.  Hmmm, he thinks, maybe I should start looking.

Doctor to patient in follow-up visit: Last time we met, your cholesterol was pretty high, and you promised me that you’d eliminate red meat.  Have you stopped eating all those ribs?

The patient thinks to herself: That must have gone in one ear and out the other; I don’t even remember him saying that.  I don’t like being pressured like this, and he’s always so rushed.  But it’s really hard finding a doctor these days, so I’ll tell him a white lie: “Sure doc, no problem. I’m all set.” As he is leaving, she starts to wonder if he treats all his patients this way or only minorities.

When confronted with a yes or no question, many people assume that there is a right answer, and they may fear being judged or criticized for getting it wrong.  Is there a better way to ask questions in this era of quick exchanges and multitasking?

The antidote: Instead of asking potentially off-putting yes or no questions, endeavor to communicate with curiosity, in a way that is genuine, supportive, and helpful.  Examples:

Effective communication requires patience and time, with body language that broadcasts warmth and interest.  This is especially important when the person on the receiving end feels subordinate to the questioner.

These tips also apply to personal relationships.  Communicating and engaging with other people by asking open-ended questions strengthens relationships at home and in the community.   Collaboration and teamwork are more likely to blossom when we inquire and listen patiently.

It is sad that clinicians and leaders alike are so time bankrupt that implementing these aspirational principles may necessitate reengineering our beleaguered and inefficient health care system.

How to heal and revitalize our beloved profession [PODCAST] 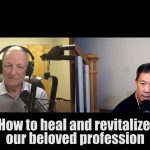