The old man sat at the front of the drift boat as it swayed gently, anchored at the river’s edge. The guide sat behind him, making final preparations for the day’s float downriver. The man had fly fished for nearly 40 years; he even tied his own flies and made fly rods such was his love for it. Age and unwelcomed health problems, though, were slowly bringing an end to the things he loved most. Something inside him said this was his last time on the river that had become a part of him long before. He tried to explain to others the “oneness” he felt with the river, and with fly fishing as well, but few understood. The guide understood, though. They had met years earlier and, though he was still “the guide,” he was now much more than that; he was a friend. Countless conversations intermixed with countless casts to countless rising trout had cemented their friendship. He sensed his friend knew this was the last time as well. There was no hurry in his preparation for the trip. Few words were spoken.

A sadness enveloped him, like an early morning mist, rising ethereally from the river, the cold water caressed by the warmer air above. This was a tailwater, it’s beginning, the bottom of a deep lake that laid behind a dam, the deepest water remaining a near-constant coldness. It not only provided electric power to the surrounding area, but it also gave life to the innumerable browns and rainbows that thrived in its waters. Only cold, clean, well-oxygenated water would allow them to survive. The river provided just that, and, for the man, even more.

He thought back to his first time fly fishing. He had no idea what he was doing that day. He only knew that for as long as he could remember; he wanted to learn. Where that came from, he had no clue. As a young boy, there was a movie, Spencer’s Mountain, which was his favorite. There was a scene in the movie with Henry Fonda and Wally Cox fly fishing while imbibing in some forbidden whisky. They were trying to catch the “big one” that Fonda knew lived in that stretch of water. Maybe that was the start? His father was not a fisherman, so he did not fish as much as he would have liked growing up, but he did whenever he could.

It was a gorgeous late October day, that first time; the trees a tapestry of orange, red, green, and yellow; the sun dancing off the water in all its radiant brilliance. He was so hopeful of catching that first trout! However, the hours that followed were spent either untangling a bird’s nest of hair-thin line or preparing to tangle with the next attempted cast. He never saw a trout, never had a strike, yet he came off the river happy, determined that he would learn to do this. Thanks to someone he met soon after, his apprenticeship began and with it a very special friendship.

Brad was in his early 30s and had previously been an Orvis guide. He saw the man’s determination to learn and over the next few years, selflessly gave of himself and his time to teach him. Amazingly, he never fished when they were together. He simply taught, only using the fly rod to demonstrate how to do something better or to teach something new. Brad eventually did the same with each of the man’s three sons as they became old enough to learn. How many hours, how many days were spent exploring and fishing the streams and rivers in which the trout lived, dependent upon a most delicate and fragile ecosystem that are the mountains of North Carolina? Here, he and his sons began their life-long journey of learning the art that is fly fishing. For him, fly fishing was a microcosm of life with its successes and failures, joys and disappointments. Precious memories from the years that followed of backpacking and fly fishing with each of his sons returned. His eyes glistened.

As he sat, his friend finishing the final preparations, the cloud of sadness began to lift just as the mist on the water does with the rising of the sun. If this was “the last time,” then he would take in every moment. His memories were enough now. His friend raised the anchor, handed him the fly rod, and the boat began to move. The man was happy.

How this physician built a direct specialty care practice [PODCAST] 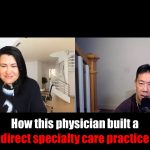