In March 1630, John Winthrop delivered the treatise “A Model of Christian Charity” at Holyrood Church in Southampton, England, prior to leading the first settlers of the Massachusetts Bay colony on their to journey to the New World. In his address, he referred to the new community they would found as a city upon a hill with the eyes of all people upon them. This reference to a portion of Jesus’ Sermon on the Mount underscored the importance of committing the colonists to brotherly love and unity, setting the needs of others and the community above one’s own needs.

I first heard this reference to a shining city on a hill at the moment of my political awakening and at the close of Ronald Reagan’s presidency in his farewell address in January 1989:

I’ve spoken of the shining city all my political life, but I don’t know if I ever quite communicated what I saw when I said it. But in my mind, it was a tall, proud city built on rocks stronger than oceans, wind-swept, God-blessed, and teeming with people of all kinds living in harmony and peace; a city with free ports that hummed with commerce and creativity. And if there had to be city walls, the walls had doors, and the doors were open to anyone with the will and the heart to get here. That’s how I saw it and see it still.

I was never much a fan of Reagan but did recognize his desire to lead all of us as a nation of different people who had unique talents to share and whose commonality of purpose exceeded partisan divisions. I also recognized that this vision was as aspirational as the source that inspired it. North stars have their role if only we faithfully chart our course by them.

As Reagan’s farewell words washed over me, I looked ahead at my immediate future and recalled my recent past. I would graduate from college a few months later and start medical school. I had just completed an idyllic nine months of study in Hamilton, New Zealand, an experience that still influences me today. I witnessed a nation of diverse people that cared about each other meaningfully. The Kiwi culture is exemplified in their national sport, rugby, emphasizing the team over the individual.

That promise of the shining city seemed more tangible as we witnessed the close of the 1980s and experienced the bliss of the 1990s. I and my contemporaries moved through those years, getting married, starting families, starting jobs, and acquiring mortgages. The demons of our nation still seemed to be suppressed by our angels for the most part. We could not know that the seeds of the cataclysm that was 9/11 and the divisions that would follow were germinating beneath us.

The number of years since that horrible day has verily seen the transformation of who we are and how we are. No longer do we have a presumption of goodwill toward those who are politically, religiously, or philosophically different from us. Yes, we have always borne the demons of racism and intolerance through our nation’s shared history, but there was almost always the patina of unity among us save for the years of the Civil War. Rather, we are now in a season of distrust and tribalism where each partisan seeks to win leverage for the sake of power alone only for those of like mind and mission.

The most insidious part of this darkening of our nation is the democratization of truth and the obfuscation of our understanding of reality. A lie told a million times on social media becomes fact. No longer can we count upon rationality, logic, and evidence to be the measures we employ to discern truth. Truth has been abducted to serve the mission of elevating influence, gaining advantage, and exercising power. It is a rot that is destroying us and creating many victims. The internet, formerly and quaintly referred to as the information superhighway, has become our road to perdition and the chief means of the purveyance of agenda-driven disinformation coming from both extremes of the political spectrum. The algorithms move us into our demagogic poles and obliterate the common ground where consensus suffocates from lack of oxygen.

This organized perpetration of deception has taken on more meaning as we have faced the last century’s most critical public health threat. Freedom which was once defined as something that required a personal sacrifice of individual concerns in deference to the needs of others and the community has now become rebranded as solely within the province of individual liberty. The simple acts of individuals wearing masks or getting vaccinated to protect all of us and ending the pandemic for our towns, cities, states, nations is too much for many among us who have distilled their catalyzed grievances into refusals to sacrifice their “personal freedom.”

Indeed, as I write these words, state legislatures, including our own in my state, are codifying this movement into law with bans on companies including hospitals, nursing homes, and medical facilities from requiring COVID-19 vaccination for their employees. And, those legislators are doing it not because of some sincerely held principles, but because they know which way the wind blows and cynicism Trumps all other considerations in getting reelected.

The victims of this now distorted concept of liberty are ones that we physicians encounter every day. The one that inspired this essay for me is an 11-year-old boy that I saw three weeks ago. He is a patient of mine in my pediatric practice who came to see me with typical respiratory symptoms that led to a diagnosis of COVID-19. While he recovered uneventfully, his father got sick the next day and died from the same illness five days later. Like the vast majority of people who die from COVID-19 now, he was unvaccinated, believing that getting vaccinated was unnecessary and part of a greater effort to undermine his personal liberty. His son is now dealing with the unimaginable grief of losing a parent at such a tender age and asking his mother if he killed his father by getting sick and causing his death. This happens every day now in our communities across our nation. These are wounds that will never heal for this generation of kids.

We have no hope of exiting this pathway to darkness unless we can collectively rise above our manufactured grievances and reductive individualism to truly witness and love each other. We must recognize and reconcile the real harms done to each other in the evil pursuit of purely selfish interests. Only then can we renew and rekindle the true light of a successful community and our city on the hill.

This doctor will be running for the legislature in the future 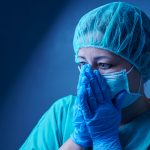 The dimming of the shining city
1 comments