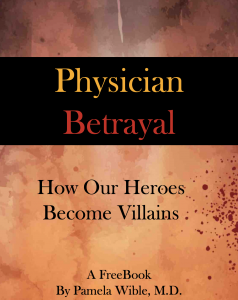 An excerpt from Physician Betrayal: How Our Heroes Become Villains.

A mass casualty event begins with one act of betrayal. By one person. A person with power. In medicine the assault weapon—doctor’s orders.

One act of betrayal by one doctor may lead to an unstoppable cascade befalling all colleagues downstream in rapid succession.

Physician betrayal always begins with self-betrayal—the act of choosing to violate one’s moral principles as a doctor leading to patient betrayal as physicians fail to uphold their oath to the vulnerable who rely upon them to act with integrity and honesty. Patients are often betrayed in front of a team of trainees—a process of betrayal grooming. Teachers who offer apprenticeship to trainees build relationships of trust and connection that may end in manipulation, exploitation, and abuse of naïve students who then experience peer betrayal—an act of emotional infidelity to medical peers who then become active participants in the betrayal cycle.

Betrayal between medical professionals is common once indoctrinated into the culture of medicine and can be fueled by jealousy, power-seeking, and fear that can push student doctors, resident physicians, attendings, even close friends and family to act against each other for their own personal gain.

A betrayal witness is collateral damage—a nonparticipant that may be swept up in the betrayal scene such as when I witnessed the cart of dogs pass by my classroom to the mass betrayal experienced by my peers during the dog lab—a mass casualty of human and nonhuman souls.

With practice, betrayal is normalized, even expected of trainees whose participation in unethical acts leads inevitably to habitual betrayal, reinforced by better job evaluations and production bonuses. Once done, betrayal is easier to do again.

Institutional betrayal happens when a medical institution is deliberately disloyal to their stated values of easing suffering and preserving life. Medical schools, clinics, and hospitals may mislead, deceive, and breach the faith of trainees and physicians causing harm through coercion, lack of informed consent, and hypocrisy.

Institutional betrayal trauma occurs when the trusted medical institution that teaches trainees how to be healers fails to protect them and can so deeply contradict what is expected that medical professionals end up blocking their trauma in order to maintain the attachment with their profession. Betrayal blindness is the state of denial among physicians in which they do not allow themselves to see what is happening because the information would threaten their professional standing and worldview. When physicians blind themselves to the betrayal and fear of future betrayals, the act helps them survive in a career they believe they can’t escape. Betrayal blindness is a coping mechanism leading doctors to dissociate en masse.

When the medical profession—a career you have pursued for years, a career you love and trust to do no harm does something to shatter the foundations of your sense of trust and worldview, the resulting trauma can be severe resulting in loss of sense of self and life-altering betrayal grief that mirrors the stages of acceptance of one’s own death (or the death of a piece of one’s soul when swept up in the betrayal cascade)—denial, anger, bargaining, depression, and acceptance. As a witness to immense betrayal within the medical profession, I’ve felt them all.

Pamela Wible pioneered the community-designed ideal medical clinic and blogs at Ideal Medical Care. She is the author of Physician Betrayal: How Our Heroes Become Villains, Human Rights Violations in Medicine: A-to-Z Action Guide, Physician Suicide Letters — Answered, and Pet Goats and Pap Smears. Watch her TEDx talk, How to Get Naked with Your Doctor. She hosts the physician retreat, Live Your Dream, to help her colleagues heal from grief and reclaim their lives and careers.

Clearing the air our kids share: a prescription for healthy schools 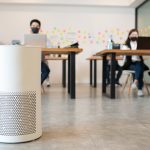 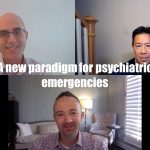